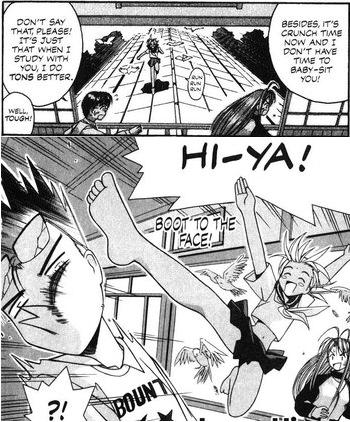 Something's going on in the plot, and it's not good. Maybe there's a dramatic confrontation, maybe your best bud is losing a fight, but whatever the case, you need to get in there, fast, dramatically, and *THUMPCRASH!!*

All of you, listen up! For these cases, you need the Dynamic Entry!

The Dynamic Entry has three main elements: Speed—It has to be fast; Surprise—They can't see it coming until it's too late; and Violence—It's gotta hurt.

The most common form is a diving kick from off screen, usually directed mostly horizontally, hitting whoever happens to be on-screen at the time. Most of the time, it's not clear how exactly they launched themselves thusly. Often suggests a Large Ham or some-such (in which case the Dynamic Entry' indicates an Incoming Ham as well). May overlap with Big Damn Heroes.

Contrast Diving Save. The "Hey You!" Haymaker is a Sub-Trope of this. See Your Door Was Open for the not-dynamic-but-just-as-sudden-or-unexplained entry. Sometimes combined with There Was a Door or Super Window Jump, for when the Dynamic Entry comes through a wall or window to increase the surprise factor. Can overlap with Attack Hello.

If the entry kills someone, it is probably a Surprisingly-Sudden Death. If somebody else throws you, then it's a Fastball Special. If you need a rope, it's Fast Roping. It's almost always a key part of a Big Damn Heroes moment, and frequently a Big Entrance.

Compare Chandler's Law. See also Stealth Hi Bye and Click. "Hello." which are equally surprising but not immediately violent. In the Back can be used this way if the attacker isn't seen until he strikes.

This should not be confused with Feet First Introduction.

Examples of Dynamic Entry include:

Retrieved from "https://allthetropes.org/w/index.php?title=Dynamic_Entry&oldid=1950796"
Categories:
Cookies help us deliver our services. By using our services, you agree to our use of cookies.