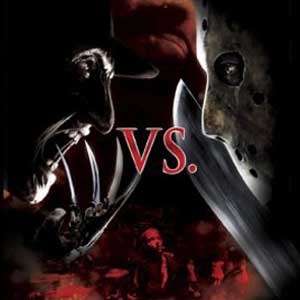 Freddy vs. Jason, a long-awaited Crossover horror/slasher film, spent years in Development Hell before its eventual release in 2003.

The film takes place after Freddy's Dead: The Final Nightmare and Jason Goes to Hell: The Final Friday[1]. Freddy Krueger needs someone to help him regain his powers; Freddy can only kill people in their dreams if they're sufficiently afraid of him, and since the town of Springwood found a way to forget about him, he's been rendered powerless. After searching "the bowels of Hell", Krueger revives Jason Voorhees, then sends him to Springwood with the intent of frightening the town into blaming his killings on Freddy (which would give Krueger back his power).

For a brief period, this works: after hearing the name "Krueger" from a police officer, teenagers connected to Jason's first few victims spread Freddy's name around town, and soon enough, the Springwood Slasher regains his powers. When Jason ends up killing one of Krueger's intended victims, however, an enraged Freddy tries to take Jason out for good. While the supernatural serial killers battle with each other in both dreams and reality, a group of teens search for a way to stop both Freddy and Jason for good.

This film marks the end of the original A Nightmare on Elm Street and Friday the 13th franchises; a Remake/continuity reboots of both series came out after this. A sequel to Freddy vs. Jason, originally planned as a film, ended up becoming the Comic Book miniseries Freddy vs. Jason vs. Ash.

Despite poor reviews, Freddy vs. Jason ended up grossing more than any prior film in either franchise (and of the reboots, only Nightmare grossed more -- worldwide, anyway).

Tropes used in Freddy vs. Jason include:
Retrieved from "https://allthetropes.org/w/index.php?title=Freddy_vs._Jason&oldid=1504609"
Categories:
Cookies help us deliver our services. By using our services, you agree to our use of cookies.