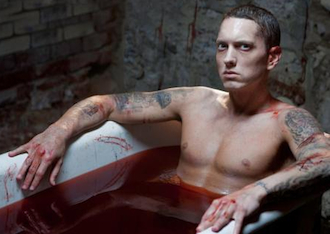 In this variation, a man harnesses The Power of Blood to rejuvenate his music career.

A character, typically evil or sadistic, bathes in a bathtub filled with nothing but blood. Often, any blood used for such a purpose will be a type of Applied Phlebotinum intended to cause some fantastic effect on the bather.

The Trope Maker comes from folklore stories about Hungarian Countess Elizabeth Bathory, who is said to have bathed in the blood of young women and/or virgins in order to restore her beauty and her youth.

While the real Countess Bathory has been accused of many unpleasant, cruel things, it's certain that her baths in blood are only the stuff of legends. However, the Blood Bath is very much a key component to be found in any story with her or about her, and any stories that feature a Blood Bath without Bathory as a character will often allude to her motives for doing this (lifted directly from the legends) and may also mention her by name (or, at least, give a character partaking in this a similar name as a Shout-Out).

Characters who bathe in blood occasionally exhibit qualities associated with vampirism, especially when alluding to blood being rejuvenating or how they come to acquire their blood in the first place; Blood Lust and fangs can be commonly noticed as well. In cases not involving vampires, characters may be dabbling in The Dark Arts, especially Blood Magic. The trope itself can also follow the Rule of Symbolism to deliver An Aesop about the evils of vanity and Immortality Immorality.

A less common, but much older, variant of the trope takes after the story of the warrior Siegfried from the Nibelungenlied, whose body was made invulnerable after bathing in the blood of a dragon.

This trope is not related to any instances where bloody corpses are found in bathtubs or any kind of small body of water, like in Bath Suicide or any grisly murders in bathrooms (unless the blood from the victim(s) of said grisly murders are used for someone else to take a bath in, of course).

Examples of Blood Bath include:

Retrieved from "https://allthetropes.org/w/index.php?title=Blood_Bath&oldid=1734868"
Categories:
Cookies help us deliver our services. By using our services, you agree to our use of cookies.