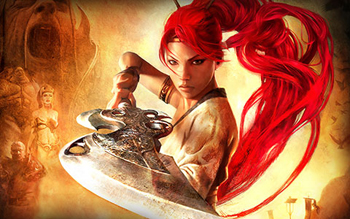 Heavenly Sword is a hack-and-slash game set in an ambiguously Asian empire where everyone speaks with British or Australian accents. It was developed by Ninja Theory and released exclusively on the Play Station 3 in September 2007. The plot concerns Nariko, the unwanted daughter of a clan whose duty is to protect the titular sword, which the ambitious King Bohan believes will grant him godlike power. Nariko and her clan sister, Kai, flee with the sword and spend the remainder of the game attempting to rescue Nariko's father and end Bohan's reign of terror. Though the plot is hardly new, it's solidly executed, with excellent voice acting and motion capture (due to the involvement of Andy Serkis and Weta Workshop) and a surprising amount of humor.

Tropes used in Heavenly Sword include:

Kai: "Maybe I should attack your weak point, for MASSIVE DAMAGE."