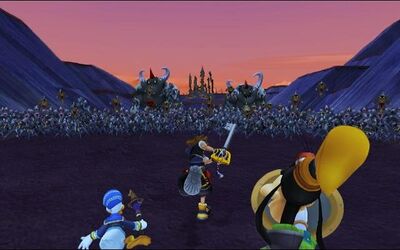 And you get to fight each and every last dang one of them.[1]

Stage of a game where the enemies begin to come out in huge droves, typically near the climax. May be part of a Zerg Rush. Increasingly common as systems have become more powerful, as it requires large amounts of sprites or polygons on screen at once. The War Sequence can cause a kind of Fake Difficulty, but looks impressive and is so fun to beat (even if it's not required you beat everyone) it's overlooked.

If you're lucky, there may be a near-equal force on your side as well, making it more of a true battle and averting One-Man Army at the same time. You'll probably be expected to carry the weight of the battle on your own, though... However, a character who beats a War Sequence without backup usually qualifies as a One-Man Army.

These are likely to be the best levels ever.

This trope is named for the informally titled "Battle of 1000 Heartless" in Kingdom Hearts II where the player must single-handedly mow down a crowd of 1000 enemies. (Which is both easier and a lot more fun than it sounds.)

Examples of The War Sequence include: