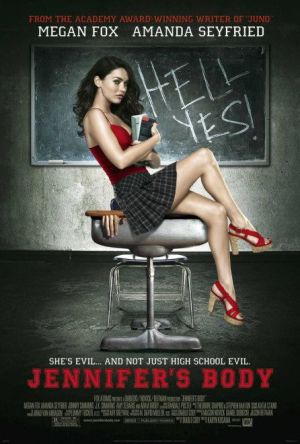 Jennifer's Body is an 2009 Comedy Horror film written by Diablo Cody, the writer of Juno, and starring Megan Fox and Amanda Seyfried. The titular Jennifer is a high school cheerleader who goes to a rock concert, where the band tries to sacrifice her to Satan in order to get a record deal. It works, but Jennifer gets possessed by a demon in the process, causing her to start seducing, killing, and eating the boys in her school. Upon finding out, Needy, Jennifer's "plain jane" best friend since childhood, sets out to stop her from wiping out the student body.

The name of the film is taken from the song "Jennifer's Body" by Hole.

Tropes used in Jennifer's Body include:
Retrieved from "https://allthetropes.org/w/index.php?title=Jennifer%27s_Body&oldid=1409036"
Categories:
Cookies help us deliver our services. By using our services, you agree to our use of cookies.