I Have Boobs - You Must Obey! 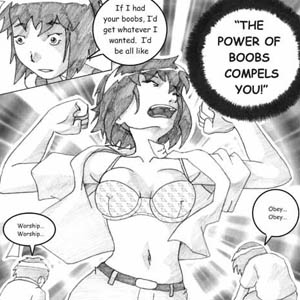 Amanda: I've got breasts, Chuck. I can make men do whatever I want. I could even make you punch yourself for a peek at these.
Chuck: Please don't make me do that.

It's a level eighty female-only persuasion spell. We try not to over-use it.
—Lilah, Ctrl+Alt+Del

How do you get something you want from another person? Logical arguments, bribery, force, or—if you're a woman trying to persuade a man—the mere fact of having mammary glands.

Yes, because writers think All Men Are Perverts, women don't even need to pretend that getting sex is a likelihood or even a possibility. All they have to do is possess secondary sexual characteristics to get men to do their bidding. We mean, They're Men, They Can't Help It, right?

Can be Truth in Television, though of course in fiction it's often exaggerated. Compare the Lysistrata Gambit, which differs in that the characters are in a relationship and that sex is on the table, but still shares the underlying assumption about men's self control. See also Distracted by the Sexy, which is perhaps an unintended side effect, and Screw the Rules, I'm Beautiful, for when it isn't necessary for a woman to have a couple of good reasons to do so. See Ignore the Fanservice for one way this gambit falls flat on its face. Another is for the woman to attempt this on a man by opening their shirt/showing "the goods," only to then find out that the man they're trying it on is gay.

Compare Glamour, where the effect is universal, and Favors for the Sexy, the voluntary, almost always male, response.

Examples of I Have Boobs - You Must Obey! include:

Batman: He's also a thirteen year old boy, find a way to distract him!
Power Girl: Why is everyone looking at me? How am I supposed to distract -- (quietly)Oh.

Nick Fury: A double PHD and all you could think of to distract him was the Mardi Gras special!?!?

Alfred: I made them big enough that you would get preferential treatment, but not so big that you'd be remembered.

Donna: These things are awesome!

Brennan: Tell me you tried "Excuse me" first?

Sally: Hey, buy us a couple of beers?
Man: Sure. So are you girls going to the big game?
Sally: We don't want to talk to you, we're just broke.

"You've been giving me boob discounts?!"

Barkeep: Very nice, Melna, but you still have to pay for those beers.

Clara: More cleavage!
Codex: I don't have more!
Tink: She means get more out.

Girl: Hi, I heard you were a lesbian.
Author Avatar: [Rants about being pigeonholed by this single trait] ...I've had just about enou--
Girl [unzips her top]
Author Avatar: Hi, I'm a lesbian.