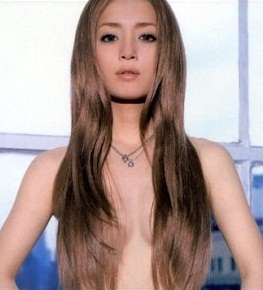 A woman is topless or fully naked, and the writers don't want to (or can't) stick an object into the scene to cover her up. Fortunately, her hair is just long and thick enough to cover what needs covered and preserve her modesty.

A form of Scenery Censor. Potential source of Fetish Fuel. Related to the Theiss Titillation Theory (after all, what will happen if she turns her head just a little, or the breeze just happens to pick up...?)

Named for Lady Godiva, a noblewoman who rode a horse through the town of Coventry to protest an oppressive tax. Legend says she rode naked: whether 'naked' means nude or 'stripped' in some metaphorical sense is academic, since most artistic representations show the lady garbed only in her flowing hair.

The rare male examples usually include a beard long enough to cover the naughty bits, and generally involve either old hermits or castaways.

Not to be confused with Peek-a-Bangs. Often overlaps with Rapunzel Hair. May combine with Hand or Object Underwear.

Examples of Godiva Hair include: