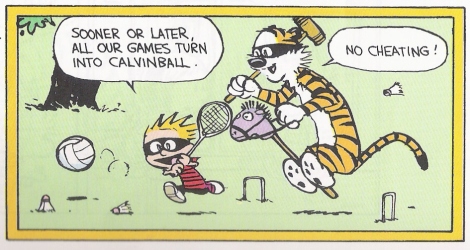 Other kids' games are such a bore!
They gotta have rules and they gotta keep score!
Calvinball is better by far!


It's never the same! It's always bizarre!
—Calvin and Hobbes

If only it were that easy...

See, this is for any game which the protagonists play, but which we don't learn the full rules for. And often, what rules we do learn are insanely convoluted, can change at a moment's notice, and/or have bizarre exceptions and by-laws. Usually, this is for one of four good reasons:

You know you're dealing with a Calvinball-style game when the game's name is introduced, followed by a cut to another scene, then a cut back to a disaster area. Those are always the best.

Compare Noodle Incident (in fact, Noodle Implements are often a staple of this trope), Take Our Word for It.

Also, the trope does not include games to which every single rule has not been given. If the basic structure of the game is laid out it is not an example of Calvin Ball. After all these are fictional games which appear in some kind of narrative, and we should not expect a full manual of rules to interrupt the flow of the story.

Also see Pac-Man Fever, where writers create Calvinball out of video games (intentionally or not) -- all we know is that most involve levels where you kill everyone with lots and lots of Button Mashing and joystick swinging -- far more than what a game should have. See Screw the Rules I Have Plot when the premise is all about a specific game but they end up turning it into Calvinball. When a known game or sport is played like Calvinball, then it's not Calvin's ball, but Wayne Gretzky's. Not related to Calvin Coolidge, but he did observe an example.

Examples of Calvin Ball include:

The distinguishing characteristic of a traditional folk game is that although it has rules they are not written. Nobody knows exactly what they are. The players have a tradition to guide them, but must settle among themselves the details of how to play a particular game.
—From One Potato, Two Potato: The Secret Education of American Children, by Mary and Herbert Knapp

Nesbitt: A five! That must be good!
Duke: Actually, that cuts your monster's power in half.
'Nesbitt: What?!? That doesn't make any sense! Are you making this up as you go along?!?

Lucivar: You look like you put in a long night yourself.
Daemon: It was interesting.
Jaenelle: There's something a bit sneaky about the positions in variation twenty-seven that give a male so much of an advantage, but I haven't worked it out... yet.
(Philip glares angrily at Daemon)
Khardeen: You know twenty-seven variations?
(Daemon says nothing)
Jaenelle: Yes, he does, and that variation is brilliant. Sneaky, but brilliant.
(Khardeen and Aaron haul him out of the room)
Khardeen: We'll get breakfast later. First, we need to have a little talk.
Daemon: It's not what you think. It's really nothing.
Aaron: Nothing!?
Khardeen: If you've figured out a new variation of "cradle" that gives a man the advantage, it's your duty as a Brother of the First Circle to share it with the rest of us before the coven figures out how to beat it.
(Daemon is not sure he had heard them correctly)
Aaron: Well, what did you think Consorts do at night?
(Daemon bursts out laughing)

Referee: We begin by an ostrogoth chicken onslaught. Player 1...
Player 1: I don't know anything about this subject, so I prefer to use my porcine opera wildcard to skip this part.
Referee: This puts you in a very delicate situation, Player 2! What will you do?
Player 2: I'm saying that at random, but I'm picking the reluctant Machiavellian houseplant.
Referee: Correct answer. That was a close one! Now it's your turn, Player 2: what's the content of an Assyrian fridge?
Player 2: A frustrated Hollywood actress sporting a baseball as a hat!
Player 1: KAMOULOX!
Referee: You win! That was a pretty stupid mistake, Player 2! According to the Melvin rule, you can't use any reference to the Parisian ukulele bonus.
Player 2: I know, I should have paid more attention...

Joey: Well, what's complicated? You spin the Wheel Of Mayhem to go up the Ladder Of Chance, you go past the Mud Hut through the Rainbow Ring to get to the Golden Monkey, you pull his tail and boom, you're in Paradise Pond!

Simon: They don't seem to be playing according to any civilized rules that I know.
Inara: Well, we're pretty far from civilization.

"We need 14 dice to play that game. Anyway, we can play it with cards, that's not a problem. What matter are the announcements."

Strong Bad: What the crap kind of freaked-up sport are you guys playing anyways? I mean, you're on a football field, but you've got a basketball goal, and basketballs and footballs...
Homestar Runner: I know! It's America's pastime!

Axel: What do you mean you lost? You were making up the rules!
Namine: She played a Monopoly "Get out of Jail Free" card. How am I supposed to beat that?

Schlock: Hah! Yahtzee! That's a Critical Hit!
Kevyn: But my cleric is on a triple word score. He gets an attack of opportunity.
Schlock: Can I burn a point of edge?
Kevyn: No. I think you have to mortgage one of your hotels.

Colin: JENGA! You all have to miss a turn!
Niece/Nephew: No, I've got an immunity card, you have to roll a 6 to play
Niece/Nephew: Can I trade Old Park Road for Colonel mustard?

Right now Elway's going to have to decide if he should hold the knobs steady, cut the straight along his outside felch, or scrump all his grits in one trug and go ahead with the check.
I wouldn't be surprised if Lamont pulls a full under-crunch moonsault.

781. My tribe's trial by combat ritual is not best described as "Calvinball with axes."

Bart: B6!
Homer: You sunk my scrabbleship!
Lisa: This game makes no sense.
Homer: Tell that to the men who just lost their lives. Semper Fi!

Phineas: That's two points for recycling! The girls' score is now the square-root of pi while the boys still have a crudely-drawn picture of a duck. Clearly, it's still anyone's game!