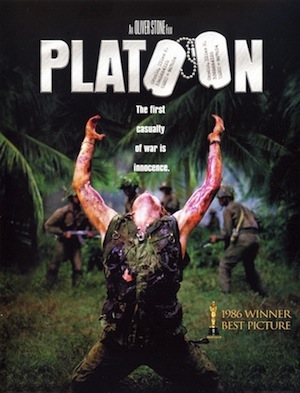 Platoon is an acclaimed war-time movie written and directed by Oliver Stone based on his experiences as an American soldier in the Vietnam War. It was released in 1986 and won the Academy Award for Best Picture.

The film follows a new recruit as he gets thrown into the humid, alien and deadly jungles of war and gives a frank look at the toll the war took on the men that fought, lived and died in the jungle. The main conflict is the murder of innocent civilians causing a rift in the platoon while our young recruit tries to find the correct thing to do in a war with ambiguous morals.

It is generally considered a milestone in war films in that the battles are far from glamorized and it is not afraid of showing just how hellish it can be; this makes it come closer to defeating Do Not Do This Cool Thing than many other films.

Platoon was named to the National Film Registry in 2019.

Tropes used in Platoon include:
Retrieved from "https://allthetropes.org/w/index.php?title=Platoon&oldid=1747474"
Categories: