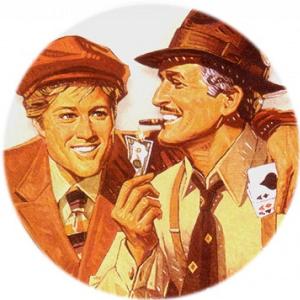 The Sting was released in 1973, and reunited Butch Cassidy and the Sundance Kid director George Roy Hill with stars Robert Redford and Paul Newman.

Set in 1930s Chicago, the film opens up with novice con Johnny Hooker and his mentor, Luther, as they pull off their latest sting. Unfortunately, they've bitten off more than they can chew this time; their latest victim has connections to Big Bad racketeer Doyle Lonnegan. When Lonnegan's goons rub out Luther and put a hit on Hooker's head, Hooker seeks out his mentor's friend, Henry Gondorff, a master of the "big con". Assembling their team, Hooker and Gondorff prepare to scam the big one out of Lonnegan.

And just to complicate things, they've got to make sure he never even finds out he's been conned, otherwise he'll put hits on all of them.

Tropes used in The Sting include:
Retrieved from "https://allthetropes.org/w/index.php?title=The_Sting&oldid=1833893"
Categories: