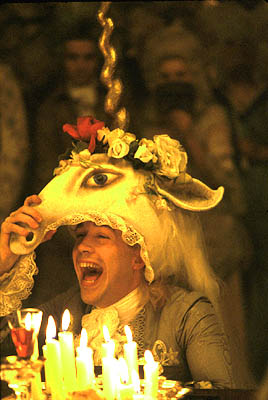 Ladies and gentleman, the man who was among the greatest composers of all time

Amadeus is a 1979 stage play written by Peter Shaffer, adapted into a film in 1984. It is based off of an 1897 one-act opera by Nikolai Rimsky-Korshakov, Mozart and Salieri, which is in turn based on an 1830 drama of the same name by Alexander Pushkin. This article deals mainly with the film.

Taking some liberties with historical accounts, the story is told from the point of view of Antonio Salieri, the court composer for Emperor Joseph II. A devout man, Salieri's faith is shaken when Wolfgang Amadeus Mozart arrives and wins the affections of the court and the audiences. That the boorish Mozart could create such magnificent compositions with seemingly no effort, while Salieri had to struggle to get to where he was, drives him to undermine Mozart any way he can. Sometimes, he even succeeds.

A misconception about the story is that its meant to be taken as fact, but there is also a misconception about this misconception- the story is about the supposed secret history of Salieri and Mozart; so in Real Life Salieri and Mozart were good friends and Salieri was a respected composer, but in this movie Salieri and Mozart are also good friends and Salieri is still a respected composer....as far as everybody else knows, Mozart included. The premise is that the only one who knows the real truth is Salieri, who is far too wallowed up in self-pity to appreciate his lot in life (which is, on the whole, pretty good) but is also enough of a Villain with Good Publicity that by the end he, and only he, really knows the extent of his bastardy (bar the priest he confesses to). In other words, it works on the idea that recorded history is different because it has been duped.

Despite the historical inaccuracy, the film is considered absolutely brilliant, and is well worth watching for its own sake.

Ironically, the greatest legacy of Amadeus was a considerable revival of interest in the life and work of Antonio Salieri.

The film version of Amadeus was named to the National Film Registry in 2019.

Tropes used in Amadeus include:
Retrieved from "https://allthetropes.org/w/index.php?title=Amadeus&oldid=1747467"
Categories: