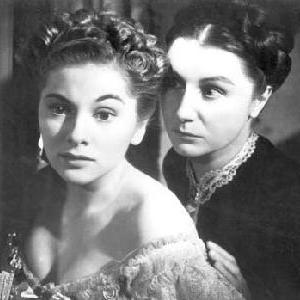 "You're overwrought, madam; I've opened a window for you."

A 1938 novel written by Daphne du Maurier (who also wrote the story that became The Birds). In 1940, Alfred Hitchcock directed the film version, his first American project, which won the Oscar for Best Picture (though, for the first of many times, Hitchcock failed to win for it - however, the movie was named to the National Film Registry in 2018). A musical version debuted in Vienna, Austria in 2006, with a projected Toronto premiere in 2010.

While working in Monte Carlo as the companion for the wealthy Mrs. Van Hopper, our young unnamed heroine meets the much wealthier Maxim de Winter: a moody, inscrutable widower presumed still to be in deep mourning for his late wife, the beautiful Rebecca, tragically drowned in a boating accident. Thus no-one is more surprised than the shy, gauche little companion when Maxim not only seems attracted to her but impetuously proposes they wed there and then.

The first signs of trouble in Paradise appear when they arrive at his elegant old country estate, Manderley. The servants have grown too fond of its late mistress and receive their new one coolly. Mrs. Danvers, the current housekeeper and Rebecca's former nurse, is especially less than thrilled with the prospect of anyone taking Rebecca's place, and has made something of a fetish of keeping her darling's things exactly as she left them -- stationery in the desk, clothes in the cupboards -- all monogrammed with that bold, decisive initial R.

As the novel progresses the shadow of Rebecca hangs more and more heavily over the house, making it increasingly difficult for our heroine to face the challenges not only of running a great estate but within her marriage -- especially when it's increasingly clear that the two are related. Gradually, with a not-so-subtle assist from Mrs. Danvers, she begins to despair of ever living up to the perfect, proud, beloved Rebecca...

Tropes used in Rebecca include:
Retrieved from "https://allthetropes.org/w/index.php?title=Rebecca&oldid=1673040"
Categories: