No Sidepaths, No Exploration, No Freedom 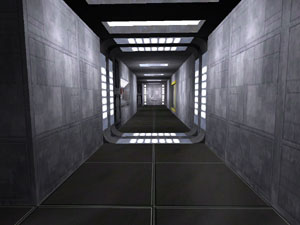 Just as a gamemaster in a tabletop game may create artificial rules, boundaries and obstacles to keep his players on the game track that he has designated (a procedure known as Railroading), so too a video game may employ such tactics in order to force the player down a specific path or method toward the goal. And one of the easiest ways to keep a player from wandering off is, quite simply, to give the player nowhere to wander to.

Technically, No Sidepaths, No Exploration, No Freedom is the polar opposite of the Quicksand Box; it describes level architecture which forces the player down a singular path. This trope is most common in First- or Third Person Shooters (except, usually, tactical shooters) and platform games, wherein the challenge is generally supposed to be the enemies and/or obstacles, not in figuring out which way to go. It can also crop up in RPGs as a very visual form of Railroading. The trope is forgivable in 2D Platform Games such as Super Mario Bros., which allow only forward progression due entirely to the limitations of the geometry; not everything is a Metroidvania. It only applies in situations where, intuitively, you'd think there might be other areas of a place to explore, but these are not implemented because they are not plot-important.

The most common incarnation is to simply have several rooms chained, each with a single entrance and a single exit, or to have long corridors with no side branches and few if any side rooms. The only options for progress are "forward" or "backward." This applies even when the rooms are tightly packed together and should have (you'd think) some degree of interconnectivity; imagine living in a New Orleans shotgun house, where you have to travel from the front porch into the living room, then through the kitchen, to the dining room, through the spare bedroom, and finally into the den, just to get to the bathroom. Every time you wanted to go to the bathroom. No shortcuts.

Note that these layouts do not necessarily preclude entirely the presence of side rooms or hidey holes. However, these are usually just little culs-de-sac with a weapon, power-up or treasure chest, or maybe a switch to allow continuation down the main path.

This is becoming much more common these days, what with the enormous graphical detail of modern level design limiting the number of paths that can be made at the required quality. Also, story is much easier to place in a game that is linear as opposed to one that involves heavy exploration. A popular method for enforcing this type of level architecture these days is by the use of Locked Doors, which adds a bit of verisimilitude by suggesting that, yes, other areas do normally exist in this location, but due to game constraints you won't be going in there; this can still be jarring if you're armed with powerful explosives or weapons designed for breaching doors and still can't get by a flimsy door, and more so if you destroy some such doors during the game but can't do anything to others.

In the 3D shooter genre, games that prominently feature this kind of architecture are sometimes called "Corridor Shooters".

In terms of Sliding Scale of Linearity vs. Openness, most examples of this trope are actually level 2, due to most level 1 games not even providing any freedom of movement to attempt exploration in the first place.

Please keep in mind that this trope is about level architecture, not the linearity or specificity of objectives.

Not to be confused with scripted games such as Adventure Games or Action Adventure which use more subtle techniques to keep the player from going Off the Rails of the game's plot. Some of them do have levels that resemble this—Compare Maze—or a Closed Circle series of rooms; but it's generally frowned upon in Interactive Fiction unless it's essentially a Cutscene.

See also Broken Bridge, The Law of Conservation of Detail, Space-Filling Path, One True Sequence, Rail Shooter, Master of Unlocking, and Quicksand Box for when developers go too far in the other direction.

Examples of No Sidepaths, No Exploration, No Freedom include:
Retrieved from "https://allthetropes.org/w/index.php?title=No_Sidepaths,_No_Exploration,_No_Freedom&oldid=1895858"
Categories:
Cookies help us deliver our services. By using our services, you agree to our use of cookies.