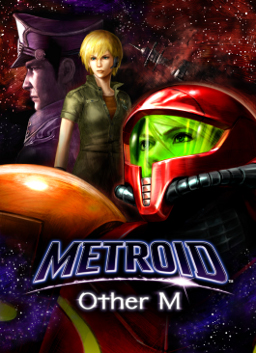 The second original Metroid game for the Wii, the first being Metroid Prime 3: Corruption, followed by its Compilation Rerelease Metroid Prime Trilogy. Developed by Project M — which includes team members from Team Ninja (of Dead or Alive fame), Nintendo SPD Production Group 1, and D-Rockets — the game is a third person action-adventure game that combines both 2D and 3D platforming. As an homage to the mechanics of the original Metroid as well as Super Metroid, the game is substantially different from the Prime trilogy.

Set after the events of Super Metroid but before those of Metroid Fusion, Other M finds our heroine Samus Aran resting on a Galactic Federation ship, convalescent after her battle against Mother Brain. Shortly after leaving, she picks up a Distress Call from a dormant bottle ship and sets out to investigate. Once there, she reunites with familiar faces from her days on the Federation Army: Anthony Higgs and her former commanding officer, Adam Malkovich. Following an attack from an alien being, the three split up to discover the nature of the strange threat.

Not to be confused with Project M.

Tropes used in Metroid: Other M include:
Retrieved from "https://allthetropes.org/w/index.php?title=Metroid:_Other_M&oldid=1955950"
Categories:
Cookies help us deliver our services. By using our services, you agree to our use of cookies.