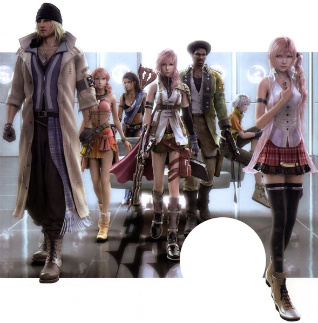 From left to right: The Big Guy, The Chick, The Sixth Ranger, The Hero, the Only Sane Man, the Tagalong Kid... and Serah.

The fal'Cie are a race existing beyond humanity. Those marked by the fal'Cie for a greater purpose are named the l'Cie (pronounced "luh-see"), each one given a special mission known as a Focus; failure to accomplish the Focus leads to the l'Cie transforming into a hideous monster. Success, on the other hand, leads to "eternal life" -- as a crystal statue.

1300 years ago, the Creator-God of this world instructed the fal'Cie to construct a paradise for humanity. The floating shell of Cocoon was created, floating high above the world. Pulse, a source of lurking menace, stretches out below Cocoon.

Cocoon's fal'Cie provided for every want for its inhabitants, from light to food, and humanity flourished. However, several centuries ago, a war between Pulse and Cocoon erupted. The Pulsians did not successfully penetrate the inner core of Cocoon, but their assault left a gigantic crater in the planetoid's outer shell.

Centuries later, the Sanctum, in a paranoid action, now quarantines anyone who has been influenced by Pulse, and exiles them from the city.

A young woman known only by the codename of "Lightning" and a Ragtag Bunch of Misfits are chosen by a Pulse Fal'Cie to become l'Cie and given an unclear Focus. They must overcome their rage, sorrow, regret, and guilt to decide if they will bow to the Destiny handed them by the fal'Cie, or carve their own path.

Final Fantasy XIII is part of a "ten year project" called Fabula Nova Crystallis Final Fantasy (a recent interview removed the XIII to avoid confusion over Type-0's name change and inclusion in the compilation), which is a Pretentious Latin Title meaning "The New Tale Of The Crystal". The other games of this project are Final Fantasy Versus XIII and Final Fantasy Type-0, which are set in the same universe, but are not related to each other directly. It is also the first offline game in the franchise to be initially released on multiple platforms, set to arrive on both the PS3 and Xbox 360 in international markets. It was released in Japan on December 17th, 2009 and was made available worldwide on March 9th, 2010. A direct sequel was released on January 31st, 2012.

Tropes used in Final Fantasy XIII include:
Retrieved from "https://allthetropes.org/w/index.php?title=Final_Fantasy_XIII&oldid=1871650"
Categories:
Cookies help us deliver our services. By using our services, you agree to our use of cookies.