Everything About Fiction You Never Wanted to Know.
(Redirected from Dark Forces Saga)
Jump to navigation Jump to search 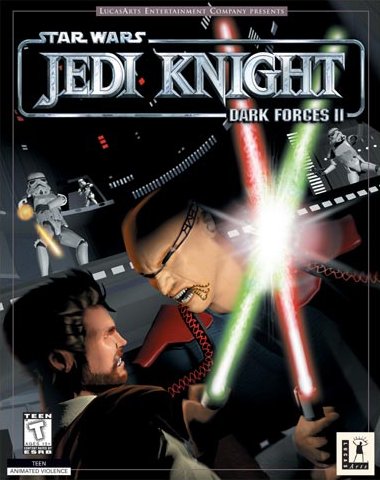 A series of Star Wars-based First-Person Shooter Video Games, with accompanying novellas. They take place during and after the original trilogy, and revolve around Kyle Katarn, a Stormtrooper-turned-mercenary-turned-Jedi who roams around the seedy side of the galaxy. Kyle is one of the most popular Expanded Universe-only Star Wars characters, due to his Deadpan Snarker dialogue combined with fun Badass qualities.

Dark Forces (1995), the first game, is a standard first person shooter. The beginning levels introduces Kyle as the one to steal the plans for the first Death Star and transmit them to the Rebel Alliance, thus leading into A New Hope. After that, it jumps after the Death Star's destruction and goes into its own story involving The Empire's secret "Dark Trooper Project". The game was a dramatic leap for graphics and level design, being one of the first to feature multiple floors. It was also one of the first successful uses of looking up and down, as well as jumping.

Dark Forces 2: Jedi Knight (1997) was the first game to feature first-person lightsaber battles. This story takes place after the events of the original trilogy. Here, Kyle learns of his Force potential and receives his own lightsaber, once owned by a Jedi Master named Rahn, whose spirit occasionally guides him in dreams and visions. He follows a lead to the Dark Jedi Jerec, with the intent to avenge his father's murder (which he recently learned was not done by the Rebels, as the Empire had told him, but by an agent of the Empire itself). Jerec seeks for a mysterious Valley of the Jedi that legend tells has monumental power, providing additional incentive to stop him. Part of the feature is a light side/dark side progression, where your actions (kill innocents or protect them) and choices and uses of Force power dictate which side you will lean to. There are two endings, light side and dark side. Word of God (and future games) say that the light side ending is Canon. Live action cut scenes moved the plot along, elevating the game to an almost movie-like experience (albeit with daytime-soap-opera-level acting).

Jedi Knight 2: Jedi Outcast (2002) is a continuation of the series, though notice the lack of "Dark Forces" in the title. Here, Kyle is persuaded to reclaim his lightsaber to battle against Desann, a former student at Luke Skywalker's Jedi Academy. He also discovers that the Imperial Remnant is gathering forces to strike against the fragile New Republic as well as the Jedi Academy. In the end, Kyle decides he can't abandon his responsiblities and becomes a dedicated Jedi.

Jedi Knight: Jedi Academy (2004), essentially an Expansion Pack in the body of a true sequel, featured a brand new character, Jaden Korr. This character is customizable, with male/female voices for several species as well as hair and clothing variations (though later novels pin down canonical species and gender as human/male, respectively). You can also choose from a selection of lightsaber hilts and colors, and later in the game can upgrade to dual wield or use the double bladed version. Jaden has somehow constructed a lightsaber without any prior Jedi training, and news of this remarkable feat results in being transported to the Jedi Academy, where you become the apprentice of Kyle Katarn. The game consists of progressing through missions assigned by Luke or Kyle until you become a Jedi Knight. Unusually, the game takes a free-form yet tiered approach—as an initiate, you can pick any of five missions to take in any order; at apprentice level, you gain a set of five new missions; and at Jedi Knight level, you get five more. Also noteworthy is that you need finish only four missions to progress to the next level, though as you get more powers with each of these missions it's in your best interest to do them all. In between each level of difficulty is a compulsory mission, linked directly to the main story. The story involves a group of Sith Cultists seeking to resurrect an ancient Sith Lord, Marka Ragnos. Like Dark Forces 2, there are two endings, one for each side of the Force (as usual with LucasArts, the light side one was eventually determined to be canonical).

The entire series is now available on Steam.

Tropes used in Star Wars: Dark Forces include:
Retrieved from "https://allthetropes.org/w/index.php?title=Star_Wars:_Dark_Forces&oldid=1721993"
Categories:
Cookies help us deliver our services. By using our services, you agree to our use of cookies.