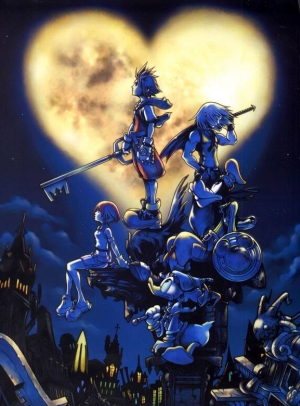 Note how the White-Haired Pretty Boy isn't facing the same direction as the others. Oh, and his sword resembling a batwing isn't hinting at anything.

In May 2001, Square Enix (back then still Square Soft) announced a game at that year's E3. To everyone's shock, the game showed scenes of Disney characters fighting tandem with Final Fantasy characters. The reaction wasn't positive, and many thought Square had gone off the deep end. Then, the game came out.

Kingdom Hearts is the first game in the Kingdom Hearts series, which merges characters from Disney and Square Enix properties along with a slew of original characters. It proved popular enough to result in (to date) five sequels and a prequel.

An update, called Kingdom Hearts: Final Mix, was released in Japan only and contains all the English voice acting as well as bonus content.

Tropes used in Kingdom Hearts (video game) include:
Retrieved from "https://allthetropes.org/w/index.php?title=Kingdom_Hearts_(video_game)&oldid=1855474"
Categories:
Cookies help us deliver our services. By using our services, you agree to our use of cookies.