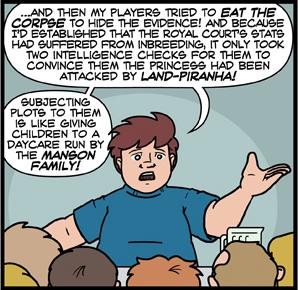 The Game Master has created an epic plot that spans time, space and dimensions. Its scope is exceeded only by its elegance, its elegance only bettered by its plot, its plot only bested by its setting, and the whole thing is held together by a compelling supporting cast of NPCs. The campaign is perfect.

...at least, that's what the Game Master thinks.

Meanwhile, the players have decided that the huge scope has made the world shallow, it's only "elegant" if you like a Cliché Storm, the plot was lifted straight from the third remake of something, the setting looks like it came from Manos: The Hands of Fate with the Serial Numbers Filed Off, and the so-called supporting cast of NPCs are either cookie-cutter stereotypes or Mary Sues who make the players feel like the supporting cast. It's about halfway through the campaign, and the players have decided that everything is only going to get worse. The time has come to strike a blow for freedom, for better plots, and against this idiotic Game Master. The players go Off the Rails.

This can take many forms, but at its core, one (or more) players disrupts the Game Master's carefully-crafted plot by killing an important NPC, revealing an important secret, or just refusing to go where the plot demands they should go. Or maybe they just switch sides.

If the Game Master is inflexible, either the GM ignores all actions that disrupt his plot (a.k.a. Railroading), or drops a whole ton of rocks on them. Or pauses the game to confer with his players about them ruining the adventure. A more creative Game Master, on the other hand, will take this player revolt and run with it, spinning a new plot out of the threads of the player's actions. Of course, good Game Masters rarely have their players revolt on them in the first place. A party going thoroughly and maliciously Off the Rails is often a herald of the end of the gaming group, or at least the end of one person's tenure as Game Master. Alternately, if there's just one player who's dissatisfied and he keeps grabbing the throttle and gunning the train, that player's character may be subject to a lightning bolt on a cloudless day, or sudden violent chest pains, or a drive-by mauling by a mind flayer that leaves everyone else untouched. (Or the other characters may just kill him or her.) The Henderson Scale of Plot Derailment has been invented by 1d4chan (the wiki for all things /tg/) to measure just how far off the rails a game can go, named in honor of the legendary Old Man Henderson.

This trope is effectively the player's version of Rocks Fall, Everyone Dies. Compare Total Party Kill, where the game-ending disaster comes from incompetence rather than malice or loss of control over the game. Note that this doesn't apply when there were no rails to begin with.

Occasionally, the train can be put back on track (any track) with a little help from Schrödinger's Gun and copious amounts of improvising. The winners in this situation are usually all involved.

Compare to Screw Destiny, where characters decide to go Off the Rails on a more cosmic scale.

Not to be confused with Derailing, which is what happens when someone wants to forcibly change a discussion topic or others' plans, or Plot Detour, which can form part of an attempt by an author of a campaign to spin out the story through misdirection or change its direction.

Examples of Off the Rails include:

Retrieved from "https://allthetropes.org/w/index.php?title=Off_the_Rails&oldid=1921469"
Categories:
Cookies help us deliver our services. By using our services, you agree to our use of cookies.