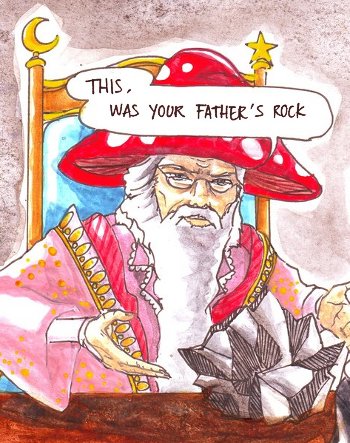 Is it a magic rock? Not that I know of.

It's pretty much a given that no one takes crazy people seriously. It's also a given that a lot of people give crazy people a wide berth lest they flip out on them. A lot of people are aware of this and choose to take advantage of it, although their reasons for doing so vary from one character to the next. Sometimes the apparent nutcase is actually perfectly sane, other times they actually are a little on the nutty side (or maybe more than a little) but deliberately play it up to the Nth degree so that they appear to be far crazier than they actually are.

Not to be confused with Insanity Defense. Compare Obfuscating Stupidity, where people pretend to be dimwitted instead of crazy.

Examples of Obfuscating Insanity include:

Retrieved from "https://allthetropes.org/w/index.php?title=Obfuscating_Insanity&oldid=1662875"
Categories:
Cookies help us deliver our services. By using our services, you agree to our use of cookies.