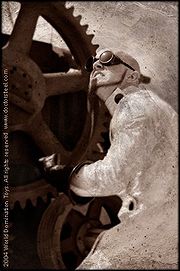 These were just a few synonyms applicable to Dr. Phineas Waldolf Steel. Formerly in the toymaking industry, Dr. Steel became frustrated at the lack of vision and originality, rebelled against his ex-employers and burned the place down. He became a Mad Scientist with a goal to take over the world, with conspiracy propaganda threaded intricately through music and toys for children worldwide. However, being a mad scientist, said toys are along the lines of Nightmare Fuel: Babies with buzzsaws, acid squirtguns, kewpie grenades, and it doesn't even begin to start there.

Most importantly, however, is the music. Dr. Steel defied all genre, having been described by Rue Morgue magazine as "hip-hop Industrial opera", but most importantly is the fact that all of them are So. Damn. Catchy. Though his music only spans about three dozen songs across five CDs, and that most online stores only carry them in .mp3 rather than physical discs, Dr. Steel put just as much love and care into each individual song as many artists do for entire discs. A very underground artist, he nonetheless made an appearance on the Jay Leno show and was even given a nod by MTV. He later started to put more effort into clever and hilarious videos, which can still be seen on YouTube.

Sadly, in 2011 Dr. Steel entered an early (and apparently forced) retirement (although some claim he was actually kidnapped by aliens). However, his army marches on, taking his philosophy to the masses and building the Utopian Playland he envisioned.

His YouTube channel is here, and his MySpace is here. Listen, and then submit yourself to the movement he spawned, dedicated to taking over the world in his name! 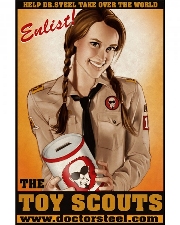 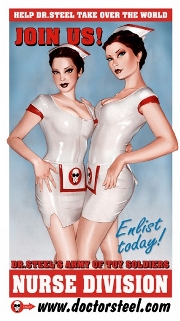 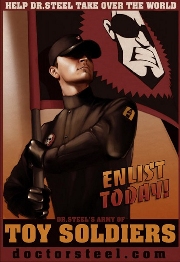 Retrieved from "https://allthetropes.org/w/index.php?title=Doctor_Steel&oldid=1937716"
Categories:
Cookies help us deliver our services. By using our services, you agree to our use of cookies.