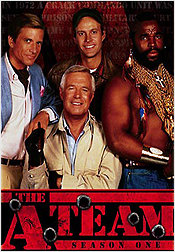 The four members of the A-Team were:

Each episode would start with a bunch of innocent people being menaced by a bunch of people with guns, who want their land, water, taxi company etc.

They would go talk to a man who they thought would get them in contact with the A-Team. Most of the time, it would turn out to be a member of the A-Team -- Hannibal in disguise.

They would go along to the location of the activity in their Cool Car, which in their case was actually a distinctive-looking custom van -- an odd choice for a group who are supposed to be in hiding. There they would do a lot of A-Team Firing, beat up the baddies and often MacGyver up an armored vehicle over the course of an A-Team Montage.

The show ran for five seasons, with several minor cast changes along the way; the show's eventual decline was attributed to the constantly-recycled and extremely formulaic plot. Attempts to win viewers back, by both changing the overall premise and having the A-Team overseen by a former antagonist, worked for only a short while.

Logic and credibility were usually ignored for the series' trademark over-the-top explosions, but the show never took itself particularly seriously, anyway: most of Hannibal's disguises were paper-thin, the villains were usually mostly-inept and somewhat one-dimensional, and the weapons that the Team cobbled together from miscellaneous parts were invariably more effective than the machine guns that the episode's villains used.

A big-screen version was released in June 2010, with Liam Neeson, Bradley Cooper, Sharlto Copley and Quinton Jackson as the team. The trailer can be seen here. Tropes go to the respective page.

The A-Team is the Trope Namer for:
Tropes used in The A-Team include:
Retrieved from "https://allthetropes.org/w/index.php?title=The_A-Team&oldid=1911645"
Categories:
Cookies help us deliver our services. By using our services, you agree to our use of cookies.