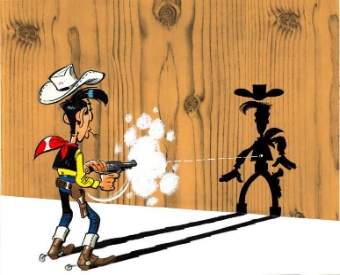 "There was a blur, and then shootin'. I didn't see no draw."
—Sheriff Root, Preacher (Comic Book), on the Saint of Killers

The one-on-one gunfight is a derivation of the more ancient practice of duelling. Thus, a key characteristic of many gunfighters is their ability to field their weapon of choice with lightning speed. This is critical to their ability to deliver the Instant Death Bullet rather than receive it, although they may choose to blast the gun out of their adversary's hand. The Western Showdown At High Noon is the classic setting for this trope, although it appears in pretty much every genre with guns.

Because the trope is so well evolved, there are many refinements. Guns and holsters are commonly altered to make the quick draw more effective. Subverting the quick draw by removing an adversary's ammunition before the showdown is a well-known ploy. Shooting from the hip is a way to improve the speed of the draw at the expense of accuracy. You may also have the firearm in an apparatus that sends it directly into your hand.

Examples of Quick Draw include:

"I saw him fire one shot in warning...no, actually I didn't. It just sort of...happened" --Sir Norris

Then there was a gun going off in his hand. I didn't see him reach for it, or where he drew it from. It was just in his hand, firing....

My circuits slow;
I'm not scared anymore.
Reach for my weapon, and in turn,
You're reachin' for yours.
My circuits slow;
What they said is a lie.
The shots are heard and the
Bullets scream death as they fly.