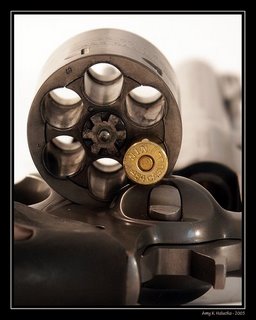 Russian Roulette: A game of suicide and luck for 2-6 players.

History: The game was allegedly invented by the Russians either during World War I or by those assigned to Siberia. If the latter, to deal with the extreme boredom, as their assignment was often referred to as 'counting trees', while the former was to try and get out of the extremely bloody and inglorious war. There are no indication however that this is true (and such outlandish behaviour would have most likely been recorded as suicides and duels were usually described in length) as the first mention of this game (as well as the name 'Russian roulette' itself) appears in a 1937 short story of the same title by Georges Sundez, a Frenchman. One allegedly factual magazine article claims that Russians call it "the American game."

Today, it's seen as the one of the more manly stunts available because of the risks involved, reduced somewhat by the common one-round-six-chambers setup. Perfect for proving you're not afraid to (or want to) die, you're a real man, or you're just Too Dumb to Live.

It can also be used to scare information out of prisoners, as a form of psychological torture.

Need we say it: Don't Try This At Home.

See also False Roulette. The Other Wiki also has an article. One of the reasons why Revolvers Are Just Better.

Not to be confused with the game show of the same name.

Examples of Russian Roulette include: