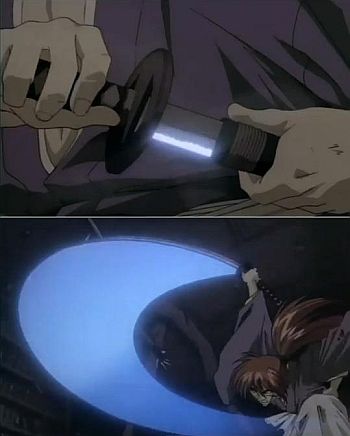 Katanas Are Just Better. This is, as we all know, a simple truth of nature, as incontestable as the boiling point of water or that the Earth orbits the Sun. Only slightly less known is that a Quick Draw is pretty damned awesome in it's own way. If you find a person who is good at combining them, then you have an Iaijutsu Practitioner.

Iaijutsu is a catch-all name for several martial art schools that center on drawing and attacking with one move. The movesets often include multiple slashes, swiping the blade off, and the subsequent re-sheathing of the blade. Battoujutsu and Iaido are often used interchangeably with it, although the words have nuances in the Japanese language.

Users of this trope can often create Sword Beams, or just strike and re-sheathe so fast that it looks like a Sword Beam.

Examples of Iaijutsu Practitioner include:

Retrieved from "https://allthetropes.org/w/index.php?title=Iaijutsu_Practitioner&oldid=1886568"
Categories:
Cookies help us deliver our services. By using our services, you agree to our use of cookies.