Take Off Your Clothes 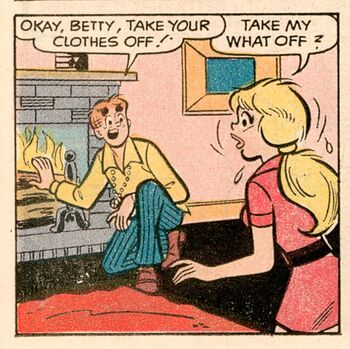 The important point is that the demand is never prurient in nature, and there is a perfectly pragmatic reason for the man to demand that the woman disrobe. Maybe the clothes are wet and she could catch a cold. Maybe they are too recognizable, and she needs to don a disguise. Maybe the man suspects there is a tracking bug (of the non-incredibly obvious kind) inside the outfit. Maybe he's a doctor and wants to give her a physical....

Whatever the case, however, the woman mistakenly concludes that the demand is sexual in nature, and reacts in kind... which can lead to different developments, among which:

To restate, this works only if the request is done innocently. If the man is just using the pragmatic reason as an excuse to see the woman naked, then it isn't this trope.

Contrast Please Put Some Clothes On or You Can Leave Your Hat On.

Examples of Take Off Your Clothes include: