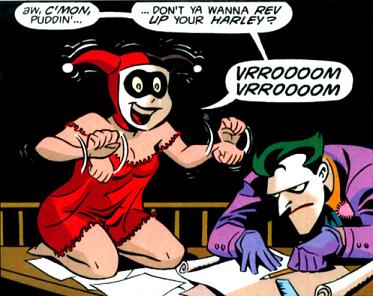 He'd much rather be thinking about Batman.

Ms. Fanservice approaches her target. Wearing her tightest blouse, she sidles up to him, runs her hand down his arm, smiles at him sweetly, does the "push-up" thing to accentuate her cleavage...

And her efforts to seduce the guy fall completely flat.

Why? Usually because the intended "victim" is completely and totally above such things. Or maybe he just knows better than to play Ms. Fanservice's game. Or he's pre-occupied. Or he doesn't swing that way. Or else he's just not interested.

Sorry, I'm Gay is a subtrope. May result in a request to Please Put Some Clothes On, depending on the nudity level of Ms. Fanservice at the time. Compare to Not Distracted by the Sexy, where people aren't intentionally ignoring the fanservice so much as they don't seem to notice it in the first place. Can play a part in a character's decision to Defect From Decadence. Often used in tandem with Ready for Lovemaking, to better subvert it.

Examples of Ignore the Fanservice include:

Retrieved from "https://allthetropes.org/w/index.php?title=Ignore_the_Fanservice&oldid=1702546"
Categories:
Cookies help us deliver our services. By using our services, you agree to our use of cookies.