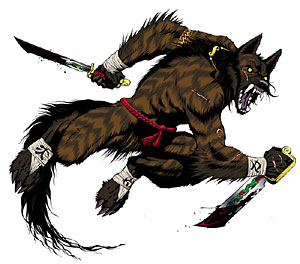 Werewolf: The Forsaken is the second game in the New World of Darkness line and the spiritual sequel to Werewolf: The Apocalypse.

Once upon a time, the physical world—the Gurihal—and the Spirit World—the Hisil—were one world, named Pangaea. Father Wolf patrolled Pangaea, ensuring that spirits were kept in line and did not terrorize humanity. Luna, one of the very powerful Spirits of the Moon, saw Father Wolf's duties, and fell in love with him. The children of this union were the first werewolves—beings part spirit, part flesh, charged to follow Father Wolf in his duties. But after spawning these Firstborn, Father Wolf grew old and weak, and could not fulfill his duties. So five of the first werewolves killed him, and then everything went to Hell—Luna cursed their name, the Spirit World broke from Earth, and their brothers, who refused to take part in the death of Father Wolf, swore revenge on them.

Werewolf: The Forsaken is about playing one of the titular Forsaken—werewolves who threw away the closest thing they had to paradise millennia ago because they believed it could not be maintained. Their duty in life is to serve as "border patrol" to the Spirit World, keeping voracious spirits from riding humanity like toys. At the same time, they have to protect their territories and fend off the Pure, werewolves who view all Forsaken as murderers for their complicity in the death of Father Wolf. It's a hard, bloody, and usually short-lived experience... but someone has to do it.

The various Splats of Werewolf are as follows

The Auspices: The inborn classification of the Forsaken, representing the phase of the moon under which each Werewolf endured his First Change, and the part in Werewolf society the werewolf is likely to play.

The Tribes: The chosen, sociopolitical Splats of the Werewolves. First, the Forsaken tribes.

Next, the Pure Tribes: united by their cause, their lack of auspices, and their dedication to Purity.

Terminology, with translations: Every Werewolf (Character) experienced his First Change into a werewolf under one phase of the moon, determining his Auspice (race). Most werewolves choose to join a Tribe (class) of like-minded changers for instruction and support. Werewolves learn Gifts (spells) from spirits, and power them with spiritual Essence (Mana) Any given territory will only support one Pack (party) of Werewolves. Some Forsaken join a Lodge (Prestige Class) to support a goal or gain the patronage of a new spiritual totem or patron.

While not officially a "limited cycle" like the later lines of Promethean: The Created, Changeling: The Lost and Hunter: The Vigil, Werewolf did have the fewest official sourcebooks of an "unlimited cycle" (like Vampire: The Requiem and Mage: The Awakening) released before White Wolf declared they were giving up traditional print for PDFs and print-on-delivery. The list of traditional print sourcebooks is...

Tropes used in Werewolf: The Forsaken include:
Retrieved from "https://allthetropes.org/w/index.php?title=Werewolf:_The_Forsaken&oldid=1757174"
Categories:
Cookies help us deliver our services. By using our services, you agree to our use of cookies.