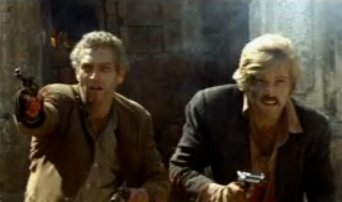 A Bolivian Army Ending occurs when the main characters face seemingly insurmountable odds which, for once, they fail to surmount, although their ultimate doom is sometimes left to the audience's imagination. The trope is named for Butch Cassidy and the Sundance Kid, which ends with the two heroes surrounded by seemingly the entire Bolivian army (more likely just a company of riflemen) after escaping from the States. They could surrender, but instead they choose to go out in a blaze of glory. The film ends just as they do so, and we never see them die. (Interestingly, the original version of the film showed their death, but test audiences preferred a more ambiguous ending.) There is some historical evidence that the real Butch Cassidy may have survived the event, but none for the Sundance Kid.

Nowadays, thanks to Conservation of Ninjutsu, there is a 99% chance that any character caught in a Bolivian Army Ending would survive if the incident took place earlier in the film. Despite the fact that it is arguably a Never Found the Body situation, this type of ending does not usually result in resurrection.

A variation, the Bolivian Army Cliffhanger, can be used in TV shows and other serial media to raise the audience's tension over which characters survive to the next season or installment.

Can be considered a variation of a Downer Ending, although it's ambiguous enough to give the viewer/reader some hope. When the camera cuts to a different scene unrelated to the battle right before the work ends, this overlaps with Charge Into Combat Cut.

Examples of Bolivian Army Ending include:

The manga, on the other hand, which has also concluded, has Lucy melting into goo, while still retaining enough consciousness to defend herself and Kouta and friends against a nuclear missile, all the while decapitating helicopter pilots left and right, before accepting her fate.

Retrieved from "https://allthetropes.org/w/index.php?title=Bolivian_Army_Ending&oldid=1773049"
Categories:
Cookies help us deliver our services. By using our services, you agree to our use of cookies.