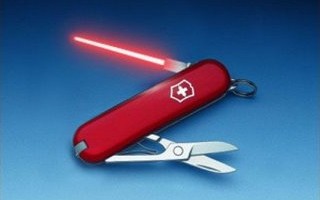 Even Dark Lords of the Sith enjoy camping now and then.

"Melee weapons that become guns are fricking awesome!"
—Linkara, Atop the Fourth Wall

Having more than one weapon is a good thing. It gives you more versatility in combat, letting you handle more problems than someone with only one weapon. Unfortunately, carrying around many weapons is a hassle—not everyone has a Bag of Holding, after all. Even if they could, they sort of have to rummage around their stuff to look for that one weapon that'll give them the edge, which is a bit of a problem in the middle of battle. So what can a character do if they want the versatility of, oh, say... ten pointy and blasty things?

Well, if you're one of those people, look no further than the Swiss Army Weapon!

These are weapons that could transform from one form to another. They may have various moving parts that need to be flipped around, or they may have some Shapeshifting capabilities, but the results are the same. Three, five, ten, and more weapons, all in one one neat, easy to carry, easy to use package. Some of the below examples overlap clearly with Ninja Pirate Zombie Robot.

If you want another way to get many weapons for the price of one, see Bifurcated Weapon, a weapon that can be separated into smaller weapons. The Morph Weapon is a kind of Swiss Army Weapon. See Every Device Is a Swiss Army Knife when it doesn't have to do with weapons, and Green Lantern Ring for an extreme version. The self-directed version is a Do-Anything Robot. Due to feature overload, often results in a Rummage Fail. And of course, this weapon goes very well along with Adaptive Armor.

Super-Trope of Swiss Army Gun and Mix-and-Match Weapon, Sub-Trope of Impossibly Cool Weapon. Do not confuse with Swiss Army Weapons.

Examples of Swiss Army Weapon include: