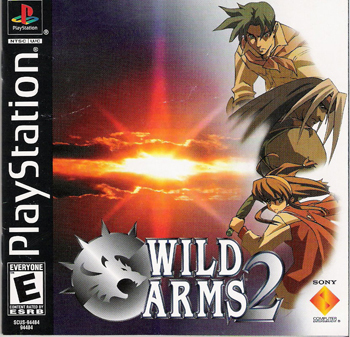 The sunset got more room than the characters

Wild ARMs: The 2nd Ignition is the second in the series of roleplaying video games produced by the Sony Company. Released in the year 2000, the game shares stylistic elements (combining the Western genre with both Fantasy and Science Fiction) with the previous game, but no direct story connection.

Like the other Wild ARMs games, the story takes place on the planet Filgaia, which, long ago, was attacked by a powerful demon. A magical sword chose a young woman, known as the Sword Magess, to wield it against the monster, banishing it to another dimension. Centuries later, when a young man is possessed by the demon, he is also granted the sword's powers, which not only returns him to normal but grants him great powers. Because of that, he is chosen to become part of the A.R.M.S., a new international anti-terrorist organization, to combat Odessa, a group that seeks to rule the world. Joining him are various heroes from around the planet.

Most of the playable characters have (noncanonical) cameos in Wild ARMs 5, just like all the other heroes in the series. Marivel also stars in a story that the characters read in Wild ARMs 3.

Tropes used in Wild ARMs 2 include:
Retrieved from "https://allthetropes.org/w/index.php?title=Wild_ARMs_2&oldid=1756910"
Categories: