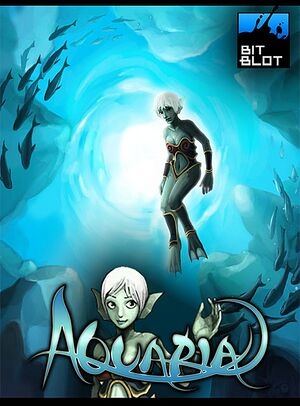 An independent video game developed by Bit-Blot. Aquaria follows the story of Naija, an amnesiac aquatic Fish Girl who has been living in a cave, eating fish for as long as she can remember. Eventually, wanderlust forces her to leave and explore the ocean around her. Not five minutes after she leaves her cave, she encounters a mysterious robed entity, whose touch gives Naija a vision that brings back some of her memories. The entity disappears and Naija follows, leading her on a grand adventure in which Naija discovers more about her homeland than she could have ever imagined.

Aquaria was released in December of 2007, winning numerous awards from the independent gaming community as well as widespread praise from gamers.

Gameplay is mostly focused around exploration and puzzles, though there is plenty of combat. Think Ecco the Dolphin meets Metroidvania.

One feature making it much easier (perhaps for younger players?) is that there are seven sources of healing, almost any two or three of which could have carried the game. (Food, health sparks dropped by some kills, berries containing similar sparks, save points that restore your health, beds that do likewise, tadpole-like symbiotes which trade some maneuverability for regeneration, and, just for good measure, a late-game item granting limited regeneration (in Song form).)

Following the success of the "Humble Indie Bundle" charity drive, Bit-Blot, the developers of the game, have released its source code (info here). Keep in mind that the game's content will remain closed, so you will still have to buy the game in order to play anything more than the demo version.

Not to be confused with the online game Aquaria or the Brazilian metal band Aquaria.

Tropes used in Aquaria (video game) include:
Retrieved from "https://allthetropes.org/w/index.php?title=Aquaria_(video_game)&oldid=1912443"
Categories:
Cookies help us deliver our services. By using our services, you agree to our use of cookies.