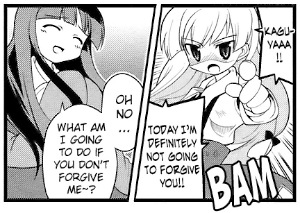 Someone might be the kindest, most laid back person in the world, but sometimes even they get pushed too far. Then they say "This is unforgivable![1]" and the audience knows that an asskicking of epic proportions is about to start.

To the western ear, it seems quite anti-climactic and quaint, but to the Japanese, this is strong language. It is the Challenge, and it is rarely defeated. Specifically, it has to do with a notion in the Japanese culture of narrowing possibilities; if the subject can't be forgiven for a transgression, then the only other option is that he's about to get his head ripped off or otherwise punished in a severe fashion. And the person who can't forgive won't give this up. Back in the era of the Samurai and the like, this had even more teeth since the person who made this challenge very likely would chase you to the ends of the earth for revenge. Basically, it's only said to someone who (in the speaker's opinion) has crossed the Moral Event Horizon, but also entails a burden: the speaker is so offended that a Roaring Rampage of Revenge is the only option. Obviously, it can overlap with Pre-Ass-Kicking One-Liner, so expect serious butt-kicking in the following Right Makes Might fight.

"I will make you pay!", "I have had enough of you!", "This Means War!", "You Monster!", "I'll Kill You!", "Your life is forfeit!", "You don't deserve to live.", "I'll get you for this!", and "Prepare to Die!" when used in dramatic situations are about the only Western expressions that come even close to what This Is Unforgivable! means in Japanese.

It is also used as a way of pointing out to the audience how evil this guy is—that he completely beyond Forgiveness and redemption. Particularly if the character being issued the challenge has crossed the Moral Event Horizon, so that the main character can freely kill them without Fridge Logic causing them to wonder if that was really necessary. Similarly, it can also be used to point out how stupid the guy is, seeing how they proved to be just plain Too Dumb to Live. Naturally, anyone stupid enough to make that someone hit him / her with such a phrase is bound to feel rather guilty.

Much like Giving Someone the Pointer Finger, this is becoming something of a devalued expression through overuse; it's prone to being bandied about lightly or overused, or for the hero to change phasers from "kill" to "massage" once they beat and befriend the Easily Forgiven villain. This tends to break the emotional impact of "This Is Unforgivable!"

In a classic fashion, villains are also quite fond of using this trope whenever everything is going wrong thanks to those puny heroes. Sometimes after they say "This Cannot Be!" and afterwards saying that they will return and such, they can be found saying this as a way of expressing that they will return for revenge against the heroes. Much like said trope, "This Is Unforgivable!" can also sometimes even be a sign of either a Heroic BSOD for a heroic character or a Villainous Breakdown for a villainous character.

Sometimes phrased as "I'll never forgive you." See also The Coats Are Off.

Examples of This Is Unforgivable! include:

Retrieved from "https://allthetropes.org/w/index.php?title=This_Is_Unforgivable!&oldid=1889634"
Categories:
Cookies help us deliver our services. By using our services, you agree to our use of cookies.