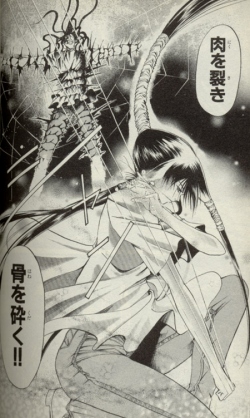 He is not a seamstress.

Razor floss is when any long, thin material—string, thread, fine wire, etc—is used as a weapon with Absurd Cutting Power. Odd as it may sound, strings can become deadly weapons in the right hands. Besides restraining enemies and even controlling other people's bodies against their will, or triggering traps, they can be pretty handy for cutting. In many works of fiction, one skilled enough, can use strings to cut opponents or even boulders, without hurting themselves. Naturally, monsters of the humanoid arachnid variety can usually be counted on to be using this trope.

Fantasy settings generally have this type of string made of human hair, while in more modern ones it's probably monofilament wire. In series less reliant on the Rule of Cool, the wire usually manifests as garrotes or tripwires, with varyingly messy outcomes.

What the audience sees usually amounts to Sword Lines sans the sword. Can be counted on to inflict an absurdly Clean Cut on its victims.

In reality, cables and metal wires can be used to inflict not so clean but still pretty nasty wounds, provided they are of the right material and/or sufficient force is applied.

Examples of Razor Floss include: