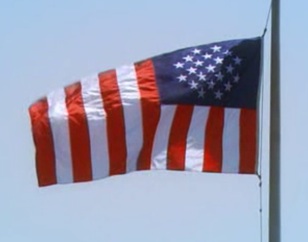 After the End, the USA lost direction.

"We, the people of the State of South Carolina, in convention assembled do declare and ordain [...] that the union now subsisting between South Carolina and other States, under the name of the 'United States of America,' is hereby dissolved."
—South Carolina Declaration of Secession

The Union of American States began its existence as 13 rebellious colonial governments united only by their dislike of the central government's attempts to enforce taxation; one constitution and two-plus centuries later, that hasn't changed a whole lot. It's a small miracle that a strong central government was formed - against the states' wishes - and has been maintained thus far, though there have been perceived and dangerously real close calls.

So now you're writing a story Twenty Minutes Into the Future, or perhaps in an Alternate Universe. How do you show that things have irrevocably but believably changed? A highly symbolic move is to break up the Union. Perhaps the State suffered some sort of crisis of the type it's never really seen before, and then It Got Worse. Maybe the country was broken up by foreign invaders, dissent with a powerful government led to a break, or maybe regional separatism and nationalism took hold as it kind of did last time. For whatever reasons, the country has now consists of many smaller nation-states.

As a bonus, your Hollywood Atlas will seem a lot more authentic. The new and smaller nations, without the tempering influence of what voters on the opposite side of the continent think, will be able to run free with their own agendas, resulting in a bit of cultural Flanderization that might actually seem justified. Thus you may see:

If you have trouble with the concept of a Balkanized America, consider the 38-state Union imagined by C. Etzel Pearcy, geography professor at California State University, Los Angeles, in 1975. Pearcy's strategy groups cities together based on population centers, shared services, and similarity of lifestyle (for example, the New York metro area would be one state, rather than expanding into New Jersey and using bits of Connecticut and Pennsylvania as suburbs), so they would make reasonable estimates of the territory each neo-state could control. On paper, such a concept could save the country billions each year, but the obvious political Flame War[1] makes it extremely unlikely.

After the End settings can sometimes have this on a more-factured scale, with a bunch of city-states that barely have any contact outside the random trade route. Odds are, most of them won't resemble the smoking husks they were built on at all, unless it was a Cozy Catastrophe.

If there's still an "official" U.S. government, but its control over the country is massively weakened, this can overlap with Vestigial Empire and is usually Fallen States of America. See also Invaded States of America. The polar opposite of this is Expanded States of America, in which America instead grows larger. A subtrope of Balkanize Me. This can be combined with some form of Punk Punk.

Examples of Divided States of America include:

Loveless: Great Britain gets back the thirteen original colonies, minus Manhattan. Florida and the Fountain of Youth go back to Spain. Texas, New Mexico, California, Arizona revolve a México. (points to most of the northwest, labeled "Loveless Land") And a little piece for me to retire on.

Even more confusing is that North Florida is considered part of the South, while the more recently developed South Florida is considered 'yankee'. This is demographics at work—until the 20th Century South Florida was economically useless, much of it being swampland. It only developed when the idea of idyllic resorts (and railroads) came into vogue, around the same time industrialization kicked into high gear. The result was rich Northerners looking for sunny (and frost-free) real estate, and South Florida farmers exporting citrus and winter fruit and vegetables north.

However, the general antipathy between the Northern and Southern portions of the state predates the Civil War at least, and likely has to do with the massive differences in Economics, as South Florida mainly focused on Cattle, Sugar and Shipping, while North Florida and the Panhandle were heavily invested in Plantation agriculture and King Cotton. The lack of easy overland travel really only exacerbated the issue.

Much of northern New Hampshire and a goodly chunk of the Lake Champlain valley in New York considered themselves, and were recognized by Vermont, as part of the Republic of Vermont. Part of the deal when Vermont joined the Union was the abandonment of the claim on this "Greater Vermont".

The Vermonters then turned to the British for recognition during the War of Independence, but the war started winding down before negotiations really got rolling. Much like Texas, a certain number of Vermonters still cling to the notion that they have the right to secede, and an active secessionist movement there is "committed to the peaceful return of Vermont to its status as an independent republic and more broadly the dissolution of the Union". According to some calculations, Vermont pays more to the Federal government in taxes than it receives back in federal funds.