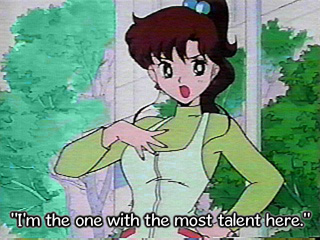 Lita[1] has by far the most talent in the show.

We're all (sadly) familiar with Bowdlerisation. Thanks to the American Animation Age Ghetto, anything in anime deemed too mature for the new, younger target Demographics has to be cut and covered up, especially any sexual Subtext, Ho Yay, or Double Entendres.

So why is it that so many adaptations seem to contain more blatant Subtext than the original?

Well, there are several reasons:

And they say Viewers are Morons.

Examples of Dub Text include: