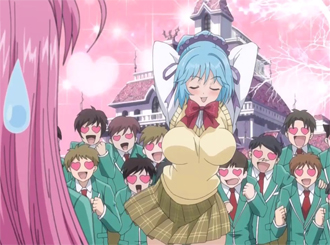 Why does she have so many admirers, I wonder?

Within various forms of media there is a prevalent assumption among creators that large breasts automatically make a woman more attractive. This often leads to significant focus on said breasts, or the character with the largest breasts getting treated as the most attractive in-universe—regardless of who the fans think is really the most attractive.

In Real Life, some do consider an overly-large bosom attractive, but a woman who is a D-cup might see such a yearning as misplaced, as it can be both unwieldy and painful.

Examples of Buxom Is Better include:

Retrieved from "https://allthetropes.org/w/index.php?title=Buxom_Is_Better&oldid=1963854"
Categories:
Cookies help us deliver our services. By using our services, you agree to our use of cookies.