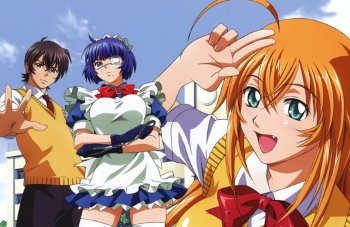 Romance of the Three Kingdoms WITH PANTY SHOTS! But seriously...

The souls of the greatest warriors, generals, and strategists of the era of Chinese history immortalized in Romance of the Three Kingdoms have continued on beyond their deaths, sealed within magatama beads handed down from generation to generation. For 1,800 years, the gems have dominated the destiny of their holders - the "Toushi", or "Fighters" - increasing their bloodlust and fighting skills while forcing them to re-enact the lives and deaths of their counterparts.

Now, the newest generation of Fighters has gathered around seven high schools in the Kanto region around Tokyo, re-enacting the battles as something in between a semi-organized street fighting tournament and an all-out gang war. And at Nanyou Academy (read: Nanyang and eventually the Wu kingdom), Idiot Heroine Sonsaku Hakufu has arrived.

And she has no clue about anything in the last two paragraphs. All Sonsaku knows is that she likes to fight, and her mom not only gave her a necklace with a pretty magatama, but also told her to make a good impression by beating up fifty Fighters on her first day. She definitely doesn't know that she's the "Reincarnation" of Sun Ce, the ruler of Wu known as the "Little Conqueror (Shou Haoh)" - the one who it's said might have united the Three Kingdoms himself if not for his untimely death.

But let's drop the pretenses. The real selling point isn't the story; it's the chance to ogle the young women in Stripperiffic outfits who have a habit of suffering massive amounts of Clothing Damage during their fights.

Ikki Tousen (Roughly "Strength of a Thousand") is an ongoing (18 volumes and counting) manga series by Shiozaki Yuji that has been adapted into four anime seasons to date, as well as a Fighting Game. The Tokyopop English release of the manga, Battle Vixens, is notorious for its Macekred translation. There was also a controversy about several panels from early in the series that seemed to be traced from Oh! Great's Tenjho Tenge manga. The whole thing originated as story-less PVC figurines in the very late 1990s.

Interestingly, the second through fourth seasons were directed by, of all people, Koichi Ohata.

Tropes used in Ikki Tousen include:
Retrieved from "https://allthetropes.org/w/index.php?title=Ikki_Tousen&oldid=1827770"
Categories:
Cookies help us deliver our services. By using our services, you agree to our use of cookies.