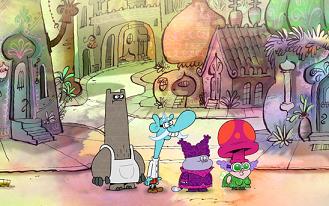 From C.H. Greenblatt, formerly a writer and storyboard artist on both SpongeBob SquarePants and The Grim Adventures of Billy and Mandy, comes this little crazy series inspired by food and Dr. Seuss.

Set in Marzipan City, a odd place full of weird and wonderful creatures, and even weirder and more wonderful foods, the show tells the story of Chowder, a little fat lavender bear-cat-rabbit boy who is the apprentice of Mung Daal, chef and owner of his namesake catering company. Along with Shnitzel, the gigantic rock monster who works as a cleaner and can only say "Radda" (though everyone still understands him), and Truffles, Daal's fairy wife, they spend many crazy and wacky adventures together in the realm of cooking, while Chowder dreams of one day becoming a chef himself, though his eating habits might prove a problem...

Tropes used in Chowder include:

Truffles: Why am I always catching you in tights?

Marmalade: Before I met Chowder all I thought about was makeup! Now I think about giraffes and makeup!
Panini: Why giraffes?
(Marmalade shrugs)

Ceviche: On a scale of 1 to 10, how desperate would you say you are right now?
Panini: (crying) Eleven!
Ceviche: (sprays breath spray in his mouth) Ohhh yeeeah...

And so Chowder and the tastebuds were led to what they believed to be certain doom. Well, maybe not certain doom; more like, doom with a strong possibility. Possibilidoom.

Mung: "It's been months since I've seen my wife and kids."
Truffles: "What are you talking about, we don't have any kids."
Mung: "I hate it when that woman reads my thoughts."
Truffles: "THEN STOP THINKING OUT LOUD!"

Conscience: You have to go back and save Gumbo!
Chowder: Are you sure? 'Cause Gumbo said he wants to hurt Mung.
Conscience: Trust me, he'll never pull it off. The episode's not long enough.

Mung: Fireworks? She's using fireworks.
Truffles: I'd completely forgotten fireworks even existed! * under breath* In my marriage. Whoa, who said that?

Gazpacho (explaining why Chowder can't stay up past his bedtime): If there's one thing mother's taught me, it's to sleep as much as you can. That way you don't have to face the horrible reality of what your life's become.

Mung: Well, Chowder, I guess you can't have your cake and eat it, too!
(everyone laughs)
Chowder: HAHAHAHA-- Wait, what's so funny?

Panini: And I just wanted to pass laws so I can make you my property!