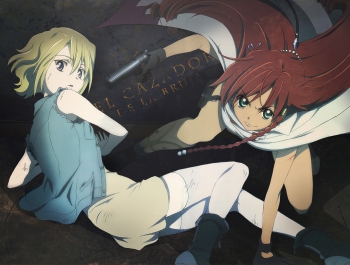 El Cazador de la Bruja (The Witch Hunter) tells the story of Ellis, a young girl who finds herself chased by bounty hunters, the most skilled of whom is Nadie. Luckily, Nadie is not about to kill her, but instead sets herself up as Ellis' bodyguard on her journey to find out more about her Mysterious Past.

Ellis has some mystifying powers, such as setting things on fire or freezing them; throwing people around with force fields; and inhuman strength, which allows her to jump several meters in one go. Unfortunately, she doesn't have complete control over those powers yet. Ellis is also haunted by memories of the killing of her former foster parent, whom she calls "the professor". Did she actually kill him? What is the role of the organization that sends one bounty hunter after another to obtain her? Who is the creepy guy who keeps stalking her all the time? And what is Nadie's role in this web of intrigue?

The series is produced by Bee Train and is the Spiritual Successor to Madlax, which in turn is the Spiritual Successor to Noir. Together, the series form Bee Train's "Girls with Guns"-trilogy, with noticeable plot similarities. El Cazador de la Bruja is generally lighter in tone than the other two series and shares neither their ambiguous endings nor their particular focus on female gunslinger action.

The series should best be seen as a story of two people who find themselves and each other against a backdrop of the Mexican desert, crazy (and ineffective) bounty hunters, and of course, tacos.

Not to be confused with the short-lived Cross Gen Comics pirate title, El Cazador.

Tropes used in El Cazador de la Bruja include:
Retrieved from "https://allthetropes.org/w/index.php?title=El_Cazador_de_la_Bruja&oldid=1933714"
Categories:
Cookies help us deliver our services. By using our services, you agree to our use of cookies.