Talking the Monster to Death 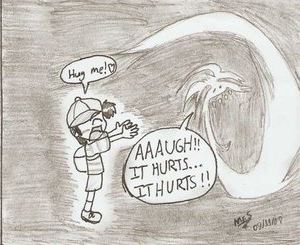 Suddenly, the good feeling went away...

The hero has cornered the vicious monster. It's taken out everyone who has confronted it thus far, and the hero seems like no exception.

That's when the hero, rather than drawing a sword, pulls out his cue cards. He begins a speech about the good things in life, the wonders of good, how Humans Are Special and the monster should respect that, yadda yadda, could someone hit the mute button please?

And it works. This hideous monster surrenders, lets itself die, chooses to Ascend to a Higher Plane of Existence, disappears in a Puff of Logic, or what-have-you.

More cynically, it moves the monster just long enough for the hero's friends to open fire...Or it doesn't work at all and just gives the monster some open spot to attack the hero.

Done well, this can be a very moving finale. Done badly - which is, sadly, a great deal easier - it comes across as a giant cop-out. Sometimes spoofed by having the monster giving up just to make the hero shut up.

This is, in a way, using the Kirk Summation as a weapon. Compare Break Them by Talking, Verbal Judo, Contemplate Our Navels and the "I Know You're in There Somewhere" Fight. When doing this, the hero might ask And Then What? will the villain do if he wins. Related to Shaming the Mob. For a different sort of talking someone to death, see Logic Bomb and Brown Note. For an alternative to death, see Talking Your Way Out. See also I'm Not Afraid of You for times a monster is disbelieved to death. See Holding the Floor for when our hero talks to the monster long enough for The Cavalry to arrive.

Examples of Talking the Monster to Death include:

Retrieved from "https://allthetropes.org/w/index.php?title=Talking_the_Monster_to_Death&oldid=1886705"
Categories:
Cookies help us deliver our services. By using our services, you agree to our use of cookies.