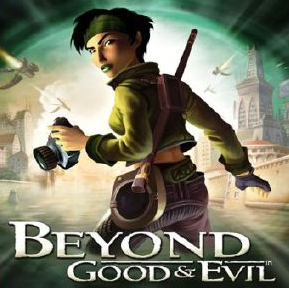 In a distant star system, presumably sometime in the future, there is a peaceful mining planet named Hillys. The peace of this planet was shattered not long ago, when mysterious alien monsters called the DomZ invaded this part of the galaxy, striking in surprise attacks, and kidnapping people away to who-knows-where. A military organization called the Alpha Section appears to be keeping the DomZ attacks at bay, but they don't seem to be doing a very good job.

In Beyond Good & Evil (2003), the player assumes the role of Jade, a young woman who lives on Hillys with her adoptive uncle Pey'j. She makes a living as a freelance photojournalist and runs an orphanage in the lighthouse she lives in. One day, after a DomZ attack, she is contacted by the Iris Network, a subversive underground press organization and resistance group, that seeks to expose the truth about the Alpha Sections and rally the people of Hillys against them. She accepts their offer, reluctantly at first, and infiltrates Alpha Section facilities to take pictures of their suspicious activities.

Designed by Michael Ancel of Rayman fame, the game plays like a Sci Fi twist on The Legend of Zelda. It combines simple yet engaging combat, with vehicle action, puzzle solving, stealth and photography challenges. The environments are detailed and beautiful, the characters are interesting and well-animated, in a stylized balance of cartoonish and realistic. It was released for IBM PC, XBox, PS2 and Gamecube, but sold few copies on any platform.

The PC version of the game was even packaged free with a certain brand of cheese in Canada in early February, 2009.

Needless to say, the gaming community pretty much went nuts when Ubisoft surprised everyone at their press conference/marketing event in mid-2008 by showing a trailer for Beyond Good and Evil 2. From that point on, the game got stuck in the ninth circle of Development Hell, and seemed to go through endless rumor cycles of being cancelled, not cancelled, moved and more. As of E3 2010, Word of God has is that the game will be switched over to a development style not unlike that of the recently revealed Rayman Origins, with a small team (and even using a 3-D version of Rayman Origins' engine). An HD remake of the first game was just released on XBLA and PSN. The gaming community went wild when Ubisoft announced in the 2019 E3 that the sequel is in the works.

Not related to the book by Friedrich Nietzsche under the same title. At all (or, for that matter, the second game in the Xenosaga trilogy).

Tropes used in Beyond Good & Evil include:

Retrieved from "https://allthetropes.org/w/index.php?title=Beyond_Good_%26_Evil_(video_game)&oldid=1911603"
Categories:
Cookies help us deliver our services. By using our services, you agree to our use of cookies.