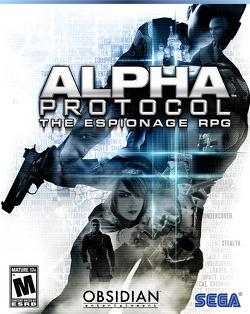 The year is 2010. Worldwide political tensions are at a breaking point when a commercial airliner is shot down by a U.S. missile over the Middle East, killing all aboard. The U.S. government claims no involvement, and dispatches Agent Michael Thorton to investigate and bring those responsible to justice.

As the first modern-day spy role-playing game, Alpha Protocol offers unprecedented control over the development of Thorton's abilities and his interactions with other characters. Upgrade skills such as physical combat, weapons mastery and cutting-edge technology as you grow in experience and complete missions. Also noteworthy for having an immensely branching storyline; pretty much every single choice and many of your conversation options can result in completely different events or endings.

The dominant themes of the game are issues of both deception and betrayal. Treachery is common, as expected in a spy and espionage thriller, and there are lies upon lies and wheels within wheels. Everyone has secrets, and everyone's agenda is suspect. Finding who to trust and who is manipulating the player is a major part of the game's storyline.

One of the more interesting features of the game is its perk system. You get rewarded with perks that boost your stats slightly for your actions during the game... regardless of what those actions are. That's right, you can get perks for doing virtually anything, which means that the game does not overly reward or punish the player for making specific gameplay or plot choices. There's no "good" or "bad", just results.

The game received mixed reviews -- while its innovative story and dialogue systems were widely praised, some found fault with its gameplay, graphics and/or lack of polish. Sales were soft enough that Sega has no plans to release a sequel. However, Obsidian have expressed tentative interest in making a sequel or Spiritual Successor so who knows? Received a jolt of new life in the fall of 2011 after a Steam sale sold the $20 game at a mere $2.

Tropes used in Alpha Protocol include:
Retrieved from "https://allthetropes.org/w/index.php?title=Alpha_Protocol&oldid=1964161"
Categories:
Cookies help us deliver our services. By using our services, you agree to our use of cookies.