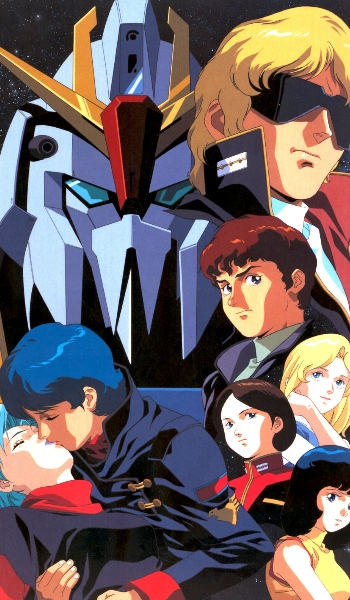 We had Chinese girls and mysterious blue haired chicks before it was cool.

Mobile Suit Zeta Gundam (Kidou Senshi Zeta Gundam) is the second, arguably darkest (though Gundam Unicorn might be heading that way), and arguably most well-received, installment in the Gundam franchise. The original sequel to Mobile Suit Gundam, Zeta Gundam's story follows wangsty Teen Genius Kamille Bidan, who joins the rebellion AEUG out of hatred for the Federation. Following the One Year War, the Earth Federation has created a special, elite branch of the military to police the space colonies and prevent anything like the One Year War from happening again. Unfortunately for all involved, this group, the Titans, are oppressive, corrupt and elitist, believing that those born on Earth are inherently superior.

Zeta Gundam features a much older and mature new cast; however, it is supported by many characters from the original series such as Captain Bright Noah, Amuro Ray and Char Aznable wearing a Paper-Thin Disguise as Quattro Bajina.

In 2005, a series of movies began which remastered the series' animation and added new animation as well. In addition, the story was given a new, Lighter and Softer Bittersweet Ending that apparently retcons Mobile Suit Gundam ZZ and possibly Chars Counterattack, if not the entire rest of the Universal Century timeline, out of canon, if not for Tomino explicitly saying it's just an Alternate Universe retelling of Zeta Gundam.

Zeta Gundam is a mainstay in Super Robot Wars, being in every game until Judgement, where after that all UC was excluded from the handheld titles, but reappears in Z and Another Century's Episode R, as well as returning UC to handhelds in Z2. During its intial run, Zeta Gundam had the highest rating of any Gundam series before and since. The show continues to be extremely popular in Japan, and its model kit sales continually get near the top of the Gundam lists. You can watch it for free on CrunchyRoll.

Tropes used in Mobile Suit Zeta Gundam include:
Retrieved from "https://allthetropes.org/w/index.php?title=Mobile_Suit_Zeta_Gundam&oldid=1680200"
Categories:
Cookies help us deliver our services. By using our services, you agree to our use of cookies.