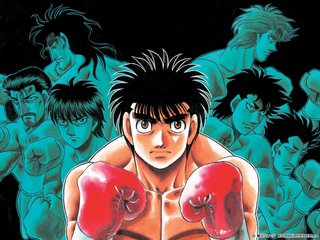 "I want to be reborn ... Takamura-san, how does it feel to be strong?"

Ippo Makunouchi is a shy high school boy. Having lost his father at an early age, he spends all his free time helping his mother run their fishing boat business. His introverted nature and his lack of any real friends attracts a group of bullies, who regularly beat him up.

During one of these beating-up sessions, Ippo meets Mamoru Takamura, a professional boxer, who rescues him and discovers his powerful punch. Ippo joins the Kamogawa Boxing Gym and begins his journey towards the Japanese featherweight title and the real meaning of strength.

The manga Hajime no Ippo, written by Jyoji Morikawa, has been running since 1989, spans more than 80 volumes and as of June 2020 is one of the longest manga series ever. From October 2000 to March 2002, a 76-episode anime adaptation, titled Hajime No Ippo: The Fighting Spirit ran on the Nippon TV Network. One TV movie, Champion Road, and an OVA, Kimura v. Mashiba, were aired soon after.

On January 6, 2009, the second season, titled Hajime No Ippo: The New Challenger, started airing on the Nippon TV Network and ran for 26 episodes.

Tropes used in Hajime no Ippo include:
Retrieved from "https://allthetropes.org/w/index.php?title=Hajime_no_Ippo&oldid=1841860"
Categories:
Cookies help us deliver our services. By using our services, you agree to our use of cookies.