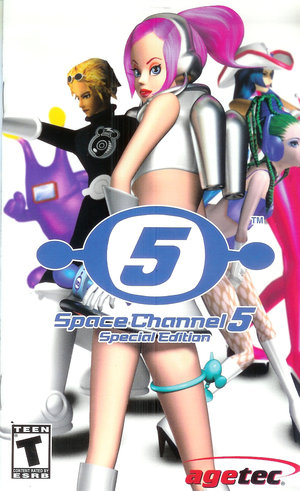 A Rhythm Game devoted to dancing duels against multi-colored screen-faced aliens or robots.

The first game has you play as spunky reporter Ulala as she tries to save the day from the Morolians while getting the big scoop, and dancing well enough to keep her ratings up and stave off being cancelled. Along the way she'll meet local dreamboat Jaguar and her Rival from Channel 42, Pudding. You'll take them on multiple times to win the scoop.

The second game has a new threat to the galaxy: Purge and his Rhythm Rogues! Even worse, Jaguar seems to have disappeared while searching for information about Purge! It's up to Ulala and her co-worker Noize to save Jaguar and stop Purge from forcing the Galaxy to dance for him! Along the way she'll meet Pine, a beautiful woman who is the head of the Space Police; President Peace, the President of the Galaxy who has the Power of Song; and Shadow, Purge's second in command and ground leader of the Robo.

There was a series of cell phone games also released in Japan known as Ulala's Channel J. Most of them were minigames except for Purge's game, which took place after he was sent into space and gave him the title of Anti-Hero. The games have since been discontinued.

One of the most cameo-able SEGA games, it is famous for its infectious and memorable soundtrack, odd gameplay and even odder premise.

It's also known for its rather bright colours, making it look like a 60s psychadellic view of space. The first game even has a message which warns about epileptic seizures in one level.

The console games were originally developed for the ill-fated Sega Dreamcast, but were eventually ported to the PlayStation 2. Part 2 is now available in high definition as part of the Dreamcast Collection, along with Dreamcast hits like Sonic Adventure and Crazy Taxi, and can be downloaded on the Playstation Network, Xbox Live Arcade or Steam.

As per The Wiki Rule, Space Channel 5 has its own wiki here.

Tropes used in Space Channel 5 include:

Fuse: Look, tentacles! Can you handle it, Ulala?
[Camera falls off stand and goes static]
Ulala, held up by tentacles: Ah... Not there!

"He created his first robot at just nine years old."

"Dance yourselves to hell, see if I care!"