Sky Captain and the World of Tomorrow

Everything About Fiction You Never Wanted to Know.
(Redirected from Sky Captain and The World of Tomorrow)
Jump to navigation Jump to search 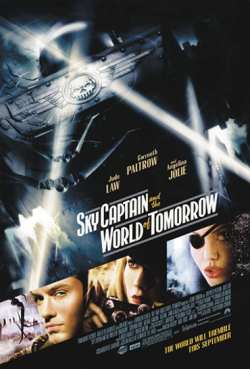 Sky Captain and the World of Tomorrow is a 2004 movie homage to the Two-Fisted Tales of the 1930's. The film follows the adventures of Ace Pilot 'Joe' Sullivan, known as Sky Captain (Jude Law) and newspaper reporter Polly Perkins (Gwyneth Paltrow).

They begin investigating the affairs of the mysterious German scientist, Dr Totenkopf, after his machines attack New York City. Further implicating Totenkopf is a string of kidnapped scientists all leading back to his involvment.

The plot shamelessly uses the outrageous gadgets and cliches of the Pulp Magazine and Comic Book genres, plus numerous shout outs to other media of the period. Filmed with live actors against computer-generated surroundings, the movie did not make enough money to offset its production costs, so a sequel is unlikely.

Tropes used in Sky Captain and the World of Tomorrow include:

The movie has the following Awesome but Impractical machines:

Joe: Could we just for once die without all this bickering?

Sky Captain: "Is it safe?"
Dex: "Well, there's only one way to find out."
(Sky Captain and Polly step across the booby-trapped threshold, holding hands, in lock-step and are relieved to be unharmed)
Dex: "...I meant throw something."