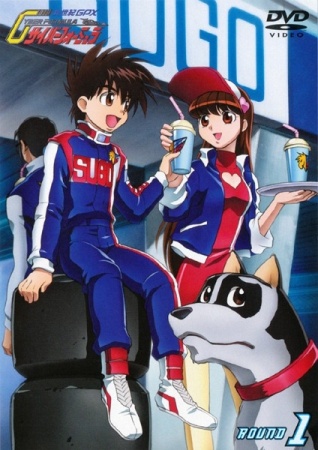 Future GPX Cyber Formula (新世紀GPXサイバーフォーミュラ, Shinseiki GPX Cyber Formula, lit: New Century Grand Prix Cyber Formula) is a 1991 anime TV series produced by Sunrise. It is an anime series about Formula racing in the future, a time when race cars are equipped with computer support systems called "Cyber Systems". The beginning of the series takes place in 2015, and continues on to 2022 in the OVAs.

The story focuses on a 14-year-old named Hayato Kazami, who one day uses a Cool Car which is equipped with his father's creation, Asurada (the most advanced cyber-navigation system in the world), to escape from would-be thieves, whose leader wanted to steal the the supercomputer machine to use it for military purposes. The machine was attacked during a delivery to the race track in Fujioka, where the qualifying rounds for the Japan Grand Prix (in which the racers would have a chance to compete in the 10th Cyber Formula World Grand Prix) takes place. He manages to escape from the thieves and retrieves the car to the Sugo team, but there's only one problem: Asurada is an AI supercomputer with a unique security feature equipped within a car, which is programmed to only one person per driver. And because Hayato was the first person who got into the car, he's the one who uses it, so the Sugo team has no choice but to make Hayato the main driver of the team due to the previous main driver (Akira Hiyoshi) leaving the team. After obtaining the "Super License" to compete in the Grand Prix, he became the youngest racer in the history of Cyber Formula, at the time. Hayato now must struggle with being on top of his game and overcoming all obstacles both on and off the race track, while meeting rivals, friends and enemies along the way.

Cyber Formula was originally planned to be a 50-episode series, but due to lackluster ratings and a sponsor withdrawal, it was cut down to 37 episodes. However, the show became popular enough with fans to win the Animage Grand Prix and gain 4 Original Video Animation sequels, which are: 11,[1] ZERO, SAGA and SIN, as well as an extra 2-episode OVA called Early Days Renewal, a compilation of the TV series. It is director Mitsuo Fukuda's breakthrough series, and he went on to direct GEAR Fighter Dendoh and Gundam SEED. Mechanical designs are made by Shoji Kawamori of Macross fame and the conceptual character designs are from Mutsumi Inomata Tales Series.

There are a number of drama CDs and games based on this series only in Japan, although the SNES game based on the TV anime was brought into the West as Cyber Spin, albeit with most of the references to the anime removed.

The title of the series actually is based on furigana: although the series is normally known as Shinseiki GPX Cyber Formula, the title is actually Future Grand Prix Cyber Formula; the title comprised of "fyūchā" (フューチャー), the English transcription of "Future" and GPX is pronounced "guranpuri" (グランプリ), or "Grand Prix", hence the official title.

Tropes used in Future GPX Cyber Formula include:
Retrieved from "https://allthetropes.org/w/index.php?title=Future_GPX_Cyber_Formula&oldid=1691848"
Categories:
Cookies help us deliver our services. By using our services, you agree to our use of cookies.