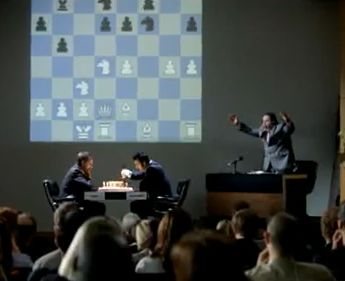 What Do You Mean It's Not Awesome? Looks like your audience needs some convincing, and that's where the announcers come in. Adding a classic sports play-by-play or color-commentary announcer, or a movie trailer-type announcer is an easy way to make anything more dramatic, more exciting, more thrilling. Large Ham announcers are particularly effective. For a variant, rather than one of the loud announcer styles, you can go with the whispering golf-announcer style instead.

See also In a World. For being applied to works of fiction, see Lemony Narrator. May overlap with Cuckoolander Commentator. Compare Large Ham Radio.

Examples of Large Ham Announcer include:

Howard: Well, it looks like there are no more people left for Jack to kill.
Kreese: Yeah, but Jack could still defile the bodies.
Howard: How so?
Kreese: You know, take trophies and stuff; check out my necklace of human ears!
Howard: Check out my stream of projectile vomit! * vomiting noises *
Kreese: Ah, dude, did you have potatoes and corn?
Howard: Yes, I did.

Eggman: We here at Eggman's Incredible Interstellar Amusement Park consider ourselves the universe's first fully Green amusement park! Although the green is from all the nausea and vomiting, but still, green is green!

"In the next test, you will utilize the laws of momentum to allow movement through portals. If the laws of physics no longer apply in the future, God help you."

"Harley tells me the Batman's car is still parked right outside Intensive Treatment. We can't have him up and leave us! Every thug, villain, murderer and kindergarten teacher that isn't carrying out party orders should head there now and smash it to pieces!"