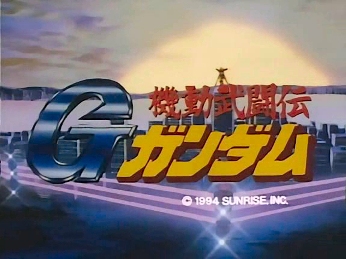 Mobile Fighter G Gundam (Kidou Budouten G Gundam, lit. "Mobile Fighting Legend G Gundam") is the first Alternate Universe in the Gundam franchise. Notable as a significant departure from the normal Gundam saga in that it was essentially a Super Robot show. Every Gundam series before and after has been essentially the prime examples of the Real Robot Genre. G Gundam has only a few mild relations to the other series besides the name "Gundam". It also takes a lot of inspiration from the Shonen genre. Part of this radical change is that Yoshiyuki Tomino set aside series director duties after being burned out on Mobile Suit Victory Gundam, and that Bandai demanded a Gundam tournament story in an attempt to increase gunpla sales, which were doing poorly at the time.

G Gundam is set in the Future Century (FC) in which The Federation, consisting of several colonies corresponding to Earth's nations, has held a robot-battling competition called the Gundam Fight every four years to determine which colony would gain control of the government. The show's story takes place in the year FC 60, the year of the 13th Gundam Fight, and follows Neo-Japan's Gundam Fighter Domon Kasshu, as he not only fights to win the Gundam Fight, but also searches for his missing brother and the Devil Gundam. As the series progresses, Domon fights his way through several powerful opponents, gains new allies and discovers the truth about his brother, the Devil Gundam and himself.

The show completely embraced the aspects of the Super Robot Genre and featured, among many other things, a Gundam that not only looked like Sailor Venus, but in one episode actually GLOMPS the main character's Gundam (Link). It is impossible to accept this show without understanding Refuge in Audacity, but what keeps this as a proud Gundam series is the nature of the Gundam Fight itself. Without the tournament, Earth would return to its previous habit of resolving conflicts... through war.

This was also noteworthy as the first Gundam series made after the toy company Bandai bought Sunrise.

Compare and contrast Macross 7 in terms of a franchise sequel that differs greatly from the source material.

In 2010, as part of a project to revive interest in the Alternate Universe Gundam stories, an expanded retelling titled Choukyuu! G Gundam began serialization in Gundam Ace.

Let's get things started! Gundam Tropes all set! Ready, GO!!!
Retrieved from "https://allthetropes.org/w/index.php?title=Mobile_Fighter_G_Gundam&oldid=1964665"
Categories:
Cookies help us deliver our services. By using our services, you agree to our use of cookies.